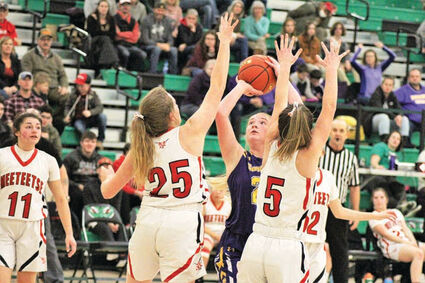 Anna Peterson, center, goes in for a basket against the Meeteetse Lady Longhorns on Thursday afternoon.

"We are very excited to be going to the state tournament! It was an exciting weekend with many close games for us," said Head Coach Heather Bartlett. "I am very proud of the girls and their efforts in all of the games this weekend. They had to grit out four games, three of which were in less than 24 hours, which was really tough.

On their road to the state...