Miners working to lay a foundation 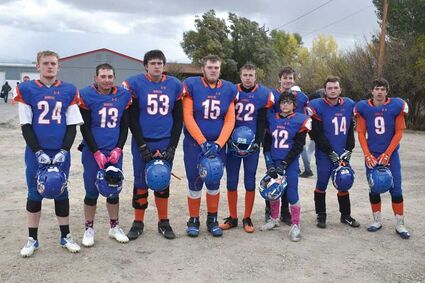 The small but mighty Hanna, Elk Mountain, Medicine Bow Miners have been playing six-man with, at times, only six men this season.

The Hanna, Elk Mountain, Medicine Bow (HEM) Miners are living proof winning isn't everything to have a successful season.

The Miners have literally been down to six men to play six-man. The team has even had to forfeit at times because three players were out at the same time making it impossible to field a team.

This adversity has not dampened the teams' spirit and it shows when they get on the field.

Brady Oltmans, editor of the Sublette Examiner and the Pinedale Roundup, has mentioned the team on his Twitter account, calling them the "Iron Miners" for the sheer tenacity the team shows whenever they play.

The team has two seniors, but Joseph Borah has been out this season due to a knee injury which was recently operated on.

Dylan Romero is the lone senior playing this year. There are five juniors, one sophomore and two freshmen.

"Our team goes out there knowing we are the underdog every game," Romero said. "So we go out and fight. We might be the underdog, but we go out there and push as hard as we can until the last buzzer."

Romero has had a great season this year, although scores and statistics don't show how much he has improved since last year when he was a junior.

"I hit the weights hard this past summer at the recreation center and it made a difference," Romero said.

Romero attributes the heart the team has to all the players being committed to playing 150 percent for each other.

"All of us work together," Romero said. "We have a great team bonding. There is always laughter at practice and during the games, and that helps a lot."

Romero does admit always being undermanned does get tough.

Romero said the team sets goals in the locker room and then do their best to attain them.

"If we meet our goals, then we try and push farther," Romero said. "A lot of our good attitude is the coaches. They keep pushing us in practice and get us to work hard when it comes to conditioning because we are all in most of the game. They build us up and that is important."

Junior Tom Wagner agrees it is important to play the best possible.

"You can't go in thinking the team is going to lose," Wagner said. "You have to keep your head up and play your hardest because that is what all on this team is doing."

Wagner said there is a lot of positive reinforcement on the team from all the players.

"If someone does something good, we congratulate them, and don't harp when mistakes happen," Wagner said. "No yelling can be done if someone has an error; we can't be dividing the team. We have to stay together and play together. That is why we do our best to make someone feel better if they are a little down because of a play. I think we have always had heart, but this year it shows more because we are going up against teams of 20 kids."

Another junior, Rayce Ward, said the team is very close and that component makes a difference.

"We are team that loves each other and we play for each other. It is a team thing," Ward said. "Our coach tells us never to give up, so we don't give up. Coach (Zack) Scott keeps us going."

Freshman Cody Priest caught his first touchdown against the Encampment team and he said it felt great, but said the season as a whole has been rewarding.

"We knew coming into the season that we didn't have a lot of people, so we knew people were going to have to figure out how to help each other to play as well as we could," Priest said. "So we just go in and have fun with each other. We realize that we are building for the future and trying to figure out what will work."

Priest made the common point the team never gives up.

"We knew we were undermanned and that we would have to come in with a chip on our shoulders to disprove that teams could just blow right by us," Priest said. "We come out fighting and don't stop until the game is done."

The other freshman, Jared Nelson, reiterated the team doesn't give up no matter how many points they might be down in a game.

"We look out for each other out on the field and don't give up," Nelson said. "We are having fun out there because my team is great. We keep each other up and coaches keep our spirits high even when we make mistakes. They help us through it."

Jesse Deegan, a junior, believes the coaches have been a major factor in how the team plays with the positive attitude it has, although there are only eight players.

"Coach Scott, every time that we play, every time we practice, he tells us give our best and our hardest effort on every down," Deegan said. "He says never give and play each down with short term memory, so in case we do something bad, we have to forget it, move on and keep playing."

Deegan said the heart that the team is forging with each other will help them next year.

"We are a pretty young team," Deegan said. "We are only losing one player next year and we will try and build on our heart next season. Heart is the hardest thing to have and we have it now."

Howard Bame is a junior on the team and said it is a group that doesn't fight with each other.

"We play as a team. We can play with anybody," Bame said. "We work as a team and you can do a lot with eight people if you don't fight."

Bame points out the team runs a lot of conditioning drills to be ready for each player to be in most of the game offensively and defensively.

"We do a lot of conditioning drills every day. A lot, every day," Bame said. "It almost becomes routine to where you know you're out there a lot. It is especially good for the younger players, because they are getting a lot of experience and a lot of playing time."

To Bame, the best part of playing this season is the fun he is having.

"If there is one thing that I have to say about this season, is that it is fun," Bame said. "You don't usually get to play as much on the field that we do. I think it is one of the greatest feelings ever."

The time on the field is a plus to junior Quinn Felton.

"Having few people means we have to work harder and step up more and have fun," Felton said. "It is definitely tiring but, playing more, you learn quickly and learn to adapt. You learn what you are good at, what your teammates are good at. It feels good to just keep pushing and never give up no matter what the score is."

The only sophomore, Anthony Solaas, threw two touchdown passes at the Encampment game. Although not the largest kid on the field, any person watching Solaas knows he gets the job done defensively and offensively.

"We work really hard in practice. We spend a lot of time looking at how we are going to face the other team," Solaas said. "The main thing is to have fun. So we have that mindset. We tell each other how good we are as team and to enjoy we are a team."

Solaas likes getting the time on the field.

"We have less people than last year, so this year I am on the field a lot more and that is fun," Solaas said. "Because I am playing more, I am enjoying the game because I am involved."

Scott has said all season long how proud he is of this team.

Scott is really enjoying the season.

"I told the kids before the game against Encampment that I am having one of the most fun years ever," Scott said. "I am a very competitive guy and I love to win, but I just love coaching this team."

Scott said it is because of the kids he is coaching this year.

"Honestly, with their effort and attitude, how can you not have a positive feeling about this team," Scott pointed out. "They aspire to make themselves great and to make each other great. We are building something good and laying a foundation for Miner football."