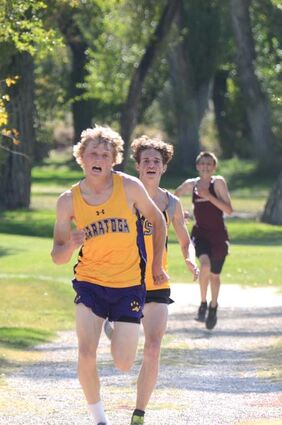 Grant Bartlett pushes through to come in 1st during the Rawlins Invitation on Friday afternoon.

Competing in the Rawlins Cross Country Invitational, Saratoga's long-distance runners didn't have to travel far last week. Running at the Sinclair Golf Course, the Panthers saw both individual and team successes for their homecoming week.

Competing against 51 other runners, Saratoga was able to secure some decent individual placings against larger schools such as Laramie, Rawlins and Cheyenne South.

Grant Bartlett, who is the Panther's two-time defending state champion, led Saratoga on Friday afternoon as he placed 1st with a time of 17 minutes, 3 seconds. Twin br...