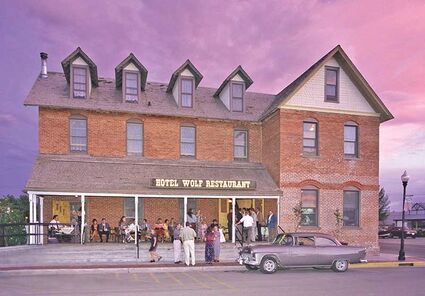 The Hotel Wolf, as seen in this file photo, is normally a hub of activity in Saratoga.

The Hotel Wolf is hard to miss coming into Saratoga. An L-shaped, two and one-half story, brick and frame building located on lots 11 and 12 of Block 27 of the town, the front of the hotel faces Bridge Avenue to the north and the west side faces First Street. With a steeply-gabled roof, roof dormers and many plain, rectangular windows, the Wolf is one of the most impressive historic structures in Saratoga.

It has enjoyed many years as a must visit venue when travelers come to the Valley.

The Valley was once a gathering place for indigenous peoples and, later, fur trappers. In t the 1860s, transcontinental transportation routes such as the Overland Trail and, later, the Union Pacific Railroad helped to stimulate interest in the Valley.

The town of Saratoga has been a draw for tourists traveling west for years because of its natural hot springs, which were once believed to have curative properties. Saratoga is said to be named for the famous Saratoga Springs in upper New York State.

When the Coronavirus arrived in the United States, by the end of March the state was issuing protocols that hit hotels, restaurants and bars hard. The Hotel Wolf felt the effects according to Kathy and Doug Campbell, the current owners.

The Campbells purchased the hotel with Michael Self in 1977. That partnership ended in 1983 when Self wanted to buy out the Campbells or be bought out. The Campbell family discussed the option and decided they wanted the Hotel Wolf. The Campbells, to this day, remain sole owners. They strive to maintain historic ambience while bringing modern conveniences where necessary.

"If you ask if we own the hotel or the hotel owns us, it depends on the time of day," Doug said jokingly.

"It is true," Kathy said. "It is almost a love/hate relationship. We have owned it a third of its existence. That is a long time."

In late 1974, the Hotel Wolf was placed on the National Register of Historic Places for Wyoming. The iconic Saratoga venue was founded by Frederick G. Wolf, a native of Germany who came to America in 1869 and found his way to Rawlins in 1875 with his wife, Christina. He became a foreman for the Union Pacific Railroad.

During this time he suffered from rheumatism, so Wolf traveled to the hot springs in Saratoga for relief in 1887.Wolf stayed and began development on the now famous hotel with his wife. It opened to the public on January 10, 1894 and served passengers on the Union Pacific between Encampment and Walcott Junction. His wife had been a baker in Germany and oversaw the women's parlor on the second floor.

In 1901, the Wolf's son, Frederick M. Wolf, drowned. He had survived the Spanish-American War and served with George Sisson, who purchased the hotel in 1913. F.G. Wolf died in 1910 and, at first, his widow leased to Sisson before he purchased it and he renamed the hotel after himself.

In another twist of fate, Sisson, a fisherman of ability, drowned in 1935 while fishing on the North Platte. In 1937, J. Earle Moore, an outdoorsman and fisherman, purchased the hotel and changed the name back to Hotel Wolf. He died 10 years later and his widow, Mary Moore, operated the business, for another 30 years.

The Hotel Wolf hasn't dramatically changed from when it was first built.

According to the 1974 nomination form for the national register written by M. Moore, the strongest change was made within a few years of it being built. A frame extension was added onto the south end of the west leg of the hotel, giving the building a more pronounced "L" shape and changing its dimensions from 42 feet deep by 60 feet wide to approximately 95 feet deep by 60 feet wide.

A minor change was when three brick chimneys were removed for a central heating system. Other changes include a single-door entrance on the northeast corner of the building to the saloon and two windows on the east face of the hotel were filled with brick.

Attached to the main face of the building is a twelve foot wide wooden porch. Like the roof of the hotel, the porch is wood-shingled. From the front porch two doors lead to a main entrance to the hotel's hallway that gives access to the main dining room on the left and the bar area and guest registration on the right. The present hotel bar was formerly the dining room.

From the second floor, the staircase leads upward to the garret-like third story containing more hallways and sleeping rooms. The ceilings of this story are low and sharply-angled because of the steep inclination of the roof and the shape of the roof dormers.

Over the years, under the Campbells' supervision, the Hotel Wolf's restaurant has become famous for its prime rib and steaks. There is a salad bar that has homemade soups and variety of greens, vegetables and fixings that have customers coming just for it.

The rooms are kept purposely antique to give a guest the feeling of going back in time to the turn of the 20th century.

To enter the bar from the front of the hotel, there are swinging doors that lead into a room with a pool table. From this room, one enters the saloon bar which is classic Western in its feel.

Until this year, due to COVID restrictions, the Hotel Wolf was never in danger of closing its doors. The protocols in March did exactly that as far as renting rooms, dining inside and operating a bar.

"It cut our income to about a fifth of our normal business, but the payroll protection plan (PPP) really helped out," Doug said. "We were able to do takeout and we kept everybody working."

"We had to," Kathy said. "They are family. But if we hadn't the PPP and a little money from the state, we wouldn't have made it."

There is a certain irony that the Hotel Wolf could not rent out rooms.

"The protocols were impossible for us to meet," Kathy said. "We didn't have the personnel or equipment to adhere to what was being stipulated."

"It was physically impossible for us to do," Doug said. "It wasn't like we didn't clean the rooms before, but it would take hours to do one room the way it was proposed and, as Kathy said, we didn't even have the equipment that was required."

Doug said he felt frustration that officials who were not elected were issuing the restrictions.

"They are drawing a salary, so it is hard to believe they really understood how badly they were hurting businesses," Doug said.

He said he understood why restaurants in various towns in Wyoming were putting up signs saying they were not following the mandates by the state.

Kathy pointed out that the wearing of masks near open flames of the grill and grease fryers was dangerous. She made her opinion known to the health inspector.

"I also said to the health inspector that for 43 years, you folks have told me bleach and water was the best for cleaning, why do you now recommend sanitizer?" Kathy said. "I asked where and who did you consult to make all these rules and regulations? I asked, why didn't you ask restaurant owners?"

Kathy said she can remember telling Doug she wasn't sure they would be open in six months as they faced down the restrictions.

"We had serious doubts if we would survive this whole thing," Doug said. "So far, we have."

"All these restrictions didn't just hurt us, but also our workers and the whole community," Kathy said. "People find themselves staying at home and don't go anywhere because they are too scared."

The Campbells said they kept workers busy where they could, such as cleaning the hotel even if they couldn't open the rooms, and doing takeout during the months before the summer season.

"We are lucky we have a staff who want to see this hotel work," Kathy said. "It makes a difference having people like this.'

Summer came and the town of Saratoga found itself busy.

"Then this town found itself inundated with people, particularly with our brethren from the south," Doug said. "A lot of them. In fact they are still coming."

Kathy said she had a couple that she hadn't seen in 10 years.

"The woman told me how much they loved coming to Saratoga," Kathy remembered. "They said it wouldn't be 10 years again before they came back."

Kathy said visitors from all over were exclaiming how great Saratoga was compared to places they had visited in neighboring states.

But even when many of the restrictions were lifted to some degree, some still caused frustration.

"There was an incident in May or June where I had my boys in the bar with me, drinking a beer after we had worked all day, when a county sheriff deputy drove by, came in and reprimanded me," Doug recalled. "I told him, anytime in my bar, I want to sit down with my employees and have a drink, I will do it."

Doug said the monitoring made him feel like a criminal.

"It really hurt," Doug said. "The worst feeling is that some of the rules and restrictions are so arbitrary and don't make common sense."

Kathy said throughout the trying times of the past year, she is grateful to the customers who have supported the Hotel Wolf."

"We wouldn't have our doors still open if it wasn't for those people who have walked through the doors," Kathy said. "They have been incredibly generous to our employees. I don't know if they have the kind of tips before, that they are making now, even with limited business. People have been so kind and so thoughtful."

Kathy concluded that she was thankful for the ongoing support.

"In spite of all what these restrictions have done during this time, there are so many good people that have kept all these businesses going," Kathy said. "Without them, it would be a different story for us and other places."