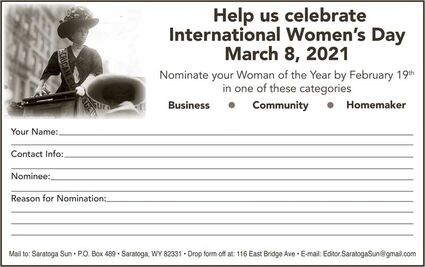 "... Ginger Rogers did everything that Fred Astaire did. She just did it backwards and in high heels."

This year, Wyoming elected its first woman senator, Cynthia Lummiss, and re-elected Liz Cheney, who is only the second woman to represent Wyoming in the United States Congress.

Since before it was a state, Wyoming has had history made by strong and independent women who were determined to make their own way in the tough and difficult environment that is the Cowboy State.

In 1890, Saratoga became home to Wyoming's first woman editor; Gertrude Huntington. Gertrude and her sister, Laura, owned and operated the Platte Valley Lyre. The Lyre, which was first owned by George Caldwell, was a one-time competitor to the Saratoga Sun and Gertrude's sharp tongue and whit were not spared for anyone.

Gertrude, according to a July 2015 article by Lori Van Pelt on wyohistory.org, was just one of three women editors in the state. Edith Chappell edited the Buffalo Bulletin in 1897 and was followed by Mary Parmlee in 1899. That same year, Cora Preston edited the Wind River Mountaineer.

Around that same time, 16-year-old Lora Webb Nichols was given her first camera. This gift coincided with the copper boom in the Encampment area and Nichols used her camera to document the day-to-day life of early Grand Encampment.

History wasn't made only in the "olden days", though. Just two years ago, Sharon Biamon was appointed to serve as the Town of Medicine Bow's first woman mayor and ran unopposed to finish out the two year term in 2020. Out of the 10 municipalities, four are led by women. Joining Medicine Bow are Hanna, Baggs and Dixon.

In both the Platte Valley and throughout Carbon County, women are also leading the way as they run their own businesses. Some with help from spouses and others on their own. The strength and resiliency of Wyoming cannot be overstated.

Every year on March 8, the world celebrates International Women's Day and, each March, Women's History Month recognizes the vital role that women have played in American History.

Business Leader, while perhaps self-explanatory, is for a woman who owns, co-owns, or manages a business in Carbon County who has made a difference in the business community.

For Community Leader, those who volunteer their time either with non-profits or by taking time to serve on a governing body are eligible.

Last, but certainly not last, is the Homemakers. As women have ventured forth into politics and the workplace, those who make the sacrifice to be stay-at-home moms and raise the next generation of leaders must also be recognized.

Those who receive the most nominations in each category will be profiled by the Saratoga Sun for a special section published on March 10.

So, whether you cut it out of the paper or make a photocopy, fill out the nomination form in this week or next week's newspaper. Tell us who you think is deserving of recognition and either drop the forms off at 116 E. Bridge Avenue, mail them to P.O. Box 489 or e-mail them to [email protected].