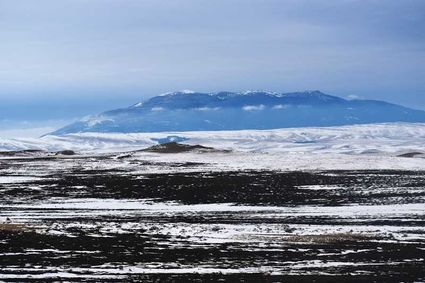 Blackened earth is still apparent as last weeks snow starts to melt near the town of Hanna.

The town clerk, Ann Calvert, told the council that the financials were not ready with the exception of payroll and the financial report had to be amended to reflect that.

Buchanan said that the High Country Joint Powers Board (HCJPB) was making progress to getting where they wanted to be with the landfill.

"The cover up at the land fill is going really well and completion seems to be near," Buchanan said. "They (HCJPB) approved Hanna obtaining the 10 acres requested and the use of the shop out there. It will all be spelled out in the MOU (memorandum of understanding)."

She said the 10 acres would be sufficient for burn piles, appliances, construction roll offs and will be able to put in approximately 50 dumpsters.

Buchanan said the town has been averaging four tons a week since the landfill was closed and trash was being taken to Laramie.

"There probably wasn't more than two feet of dirt over it," Korkow said. "It was a big one. It could have been bad, but they (Howard Contractors) filled it with slurry."

Korkow said that the fire hydrants in town had been tested for water pressure.

"The hydrants got a pretty good test this past weekend," Korkow said with a little laugh. "It got pretty busy for us this past Saturday and Sunday with the fire." (See "Fighting the RR 316 Fire" on page 1 of the Saratoga Sun edition of September 9).

Korkow had praise for the efforts of the fire departments.

David Sutter, director of the water plant, said 12 million gallons had gone out during the month.

Buchanan said there had been rumors that the water treatment plant had been damaged during the fire.

"The fire did come very close to the water treatment plant, but the efforts of the fire fighters paid off and it is 100 percent operational," Buchanan said.

"It is running great and has been every day since the fire," Sutter said. "Nothing got hurt although it is a little smelly up there. Thank God it didn't burn down, because what sort of mess would we have then. I also want to thank the fire department for the great job."

The council made the decision not to charge for water this month since many evacuated residents left their sprinklers on during the time the town was evacuated.

"They weren't watering their yards because they wanted to," Buchanan observed.

Vivian Gonzales, director of the Hanna Recreation Center, said during the fire the rec center opened to be a command center but, because of the power outage and no working generator, the command center moved to the high school parking lot.

She said the locker rooms and showers would be open. Gonzales said there will also be a tagging system utilized to keep up sanitary conditions set forth by the state concerning COVID-19.

Gonzales said the gym floor bid had been accepted and that work would begin in the next week or two.

The Council approved having the recreation center go back to its regularly scheduled hours.

South Central Wyoming Emergency Medical Services (SCWEMS) Hanna Representative Cary Lake said there has been problems with vehicles breaking down, but they are getting fixed. He said that SCWEMS is looking to hire workers if possible instead of relying entirely on volunteers.

"We are looking at paid EMTs because we just aren't getting enough volunteers to fill positions," Lake said. "We are trying to get Melissa (Sikes) out of the field and into more administration, but that hasn't really happened. She has been filling all the holes."

Lake said the Saratoga building had taken bids and only one had been offered. He said it came in twice the amount that was available. The building has been put out to bid again.

Pipher also gave a report on the Hanna Housing Board. She said that there were residents who were breaking the 'no smoking' rules but nothing was being done. The council said the board needed to enforce the rule and, if help was needed, the board could reach out to the Town for help.

Buchanan said a grant from Rocky Mountain Power for $1,000 would likely be used for signage giving directions for the Hanna Basin Museum and Hanna Recreation Center.

The Council approved all the board and department reports.

The amended financials were approved after the reports.

A conditional permit for Jon Ostling at 118 Heather was approved for laying hens and chickens.

The council approved Resolution 2020-527, a resolution supporting the submission of an application to the Carbon County Visitors Council for the Christmas Bazaar to be held at the Hanna Recreation Center.

The annual service agreement with the town of Hanna and Long Mechanical Solutions was approved.

Under citizen participation, Bales asked if investigators knew how the fire started.

Buchanan said the fire was still under investigation. She said that there were several stories going around but nothing had been confirmed.

Buchanan said she was grateful for all the help that had been given during the fire that had sprung up on Labor Day weekend.

"I don't know how we will ever be able to express enough gratitude to the different agencies, individuals and resources who helped during this trying time." Buchanan said. "They were all just amazing."

The next scheduled meeting is at 6:30 p.m. on September 13 at the Hanna Town Hall.