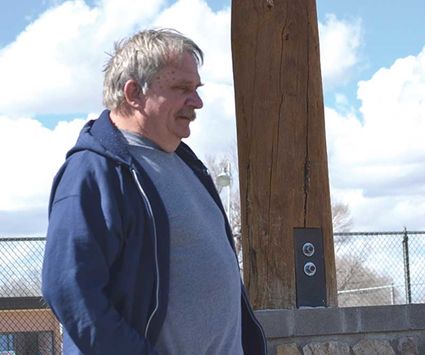 Mayor John Zeiger, watches as the not-so-hot pond is drained.

Following the announcement of Wyoming's first confirmed case of COVID-19 on the evening of March 11, events moved rather quickly as the Cowboy State began to make preparations to deal with the novel coronavirus. As the number of confirmed cases increased from one person in Sheridan County, measures were taken in attempts to prevent the spread of the virus.

On Sunday evening, an announcement from Governor Mark Gordon and State Superintendent Jillian Balow recommended that school districts across Wyoming close schools until April 3. Nearly an hour after that announcement, Carbon County School District No. 2 (CCSD2) stated in a district-wide email that they would be following Balow's recommendation.

In the announcement, CCSD2 Superintendent Jim Copeland announced that updates would be posted to the district website, crb2.org, and through the e-notes program.

"These are unusual times, but as we come together to decide the best way forward for our District depending on future developments, I have every confidence that all of us will continue to prioritize the safety, health, and well-being of our students, staff, families, and broader Carbon 2 Community," wrote Copeland.

Also on Sunday, Bridge Street Bargains announced via social media that they would be closing their doors for a two week period for the safety of their volunteers, who are predominately senior citizens.

"Please do not leave any donations in front of the store or out back during this time. Since our non profit thrift store depends on volunteers, who are mostly senior citizens, we feel strongly that their health and well being must be protected during this national emergency," wrote Carol Beach, member of Bridge Street Bargains.

On the window of the thrift store, written in window chalk, were the words "Closed until March 31."

As of Monday morning, senior centers throughout Carbon County began to follow suit. Both the Sagebrush Senior Center in Encampment and the Saratoga Senior Center in Saratoga stated that they would be stopping any sit-in dining as of Tuesday. Meals would still be available to those who required them by either picking them up at the centers or through delivery from the centers.

According to Kim Loftice, manager of the Sagebrush Senior Center, all senior centers were directed to close by Carbon County Senior Services until April 1 or otherwise directed. In addition to limiting lunch services, all activities that would normally be scheduled to take place at the senior centers are also suspended.

Later that morning, it was announced that the Carbon County Library System would close immediately until April 6. This included the main branch in Rawlins as well as the seven other branches throughout Carbon County.

The Town of Saratoga quickly followed, announcing their closure to the public in a press release issued late-Monday morning.

"Effective as of noon on March 16, 2020 the Town of Saratoga will be closing its doors to the General Public until further notice. This includes all police, fire, public works and water treatment facilities," the statement read. "This is to limit our Town employees to public contact in order to continue operating smoothly and efficiently and to ensure that services continue to be offered."

In addition to the Town of Saratoga closing their offices, they also announced limited agendas for meetings of the Saratoga Town Council.

"Town Council meetings will be limited agendas with only absolutely necessary items being addressed like paying bills and time limited issues," read the statement. "We will continue to post the agendas and, as always, accept any questions or public comments through email in advance if you do not wish to attend. The council meetings are still, by law, required to be open to the public, but we would request that if you are sick in any way, or do not feel well, not to attend."

Along with Saratoga Town Hall being closed to the general public, the Saratoga Recreation Department closed the Platte Valley Community Center (PVCC) gym and weight room and announced the suspension of youth basketball, co-ed volleyball, shooting sports and gymnastics and all other classes and activities.

Additionally, the PVCC announced their closure to the general public on social media.

"In light of recent actions taken by the State of Wyoming, the Town of Saratoga and Carbon County School District No. 2, the Platte Valley Community Center will be closed to the general public through April 3," read the statement. "All scheduled meetings and events are cancelled during this time."

One of those events, scheduled to begin on April 2, was the 13th Annual Wyoming Open Pool Tournament. 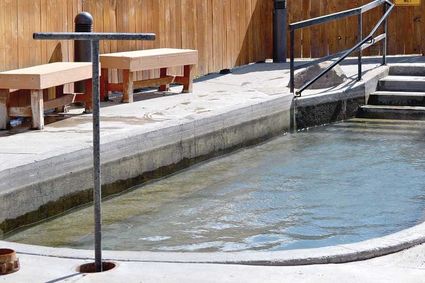 The not-so-hot pond was closed on Monday afternoon. The main springs closed on Tuesday morning.

"There's no way we can bring 200 plus people from all over the place to Saratoga in this environment. The way things are going, the state wouldn't allow us to host the event anyways," said Ed Glode, co-organizer of the event. "The event is postponed with no replacement date. The next Wyoming Open will be the 13th and we will make it awesome."

It remains to be seen, beyond the 10 confirmed cases of COVID-19 in Wyoming, what additional steps will be taken in an attempt to limit its spread.

On Sunday afternoon, the Centers of Disease Control (CDC) recommended cancelling events with 50 people or more for the next eight weeks in an attempt to limit the spread of the virus.

Editor's note: As things continue to change on a daily and, in some cases, hourly basis our readers can remain informed on closures and reduced hours by checking on our Facebook page and the Saratoga Sun website.