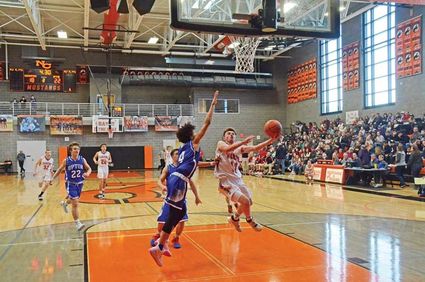 Senior Reid Schroeder (11) goes in for a layup against the Upton Bobcats in the Natrona County High School gym on Saturday afternoon.

The Encampment Tigers went to the State Tournament as the No. 1 seed in the 1A West where they dealt losses to the Hanna, Elk Mountain and Medicine Bow (HEM) Miners and the Upton Bobcats. Over the weekend, however, the Tigers were also dealt a loss as they fell to the Farson-Eden Pronghorns in the semi-final round on Friday night.

Going into the State Tournament, the first game for Encampment was against the Miners. HEM came into the tournament as the No. 4 seed for the 1A East and had faced the Tigers in the quarter-finals the year before as well.

In the 1st quarter, the Tigers put up 16 points while keeping HEM to only 6 points. They continued this trend in the 2nd quarter as well with 23 points to the Miners' 10 points. While, in the 3rd quarter, HEM put up 16 points against the Tigers it wasn't enough to overcome the deficit. Encampment outscored the Miners, again, in the 4th quarter with 13 points over HEM's 10 points.

Following their win against the Miners on Thursday, Encampment faced the Pronghorns on Friday. Last year, Farson-Eden had dealt two losses to the Tigers during the post-season with losses at the regional and state tournament. Throughout the regular season this year, however, Encampment had dealt losses to the Pronghorns and had defeated them in the regional tournament the weekend before.

It was a close game for the Tigers, but Farson-Eden started out ahead in the 1st quarter as they put up 10 points to Encampment's 8 points. In the 2nd and 3rd quarter, the Tigers outscored Farson-Eden as they put up 10 and 13 points, respectively. In the final quarter, however, the Pronghorns sped up and put 15 points on the board while keeping Encampment to only 8 points. 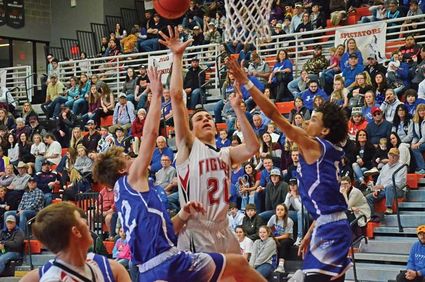 On Saturday afternoon, Encampment faced off against Upton at the Natrona County High School gym as they fought to determine who would take 3rd place. As the 1st quarter ended with a score of 18-18, it showed that the Tigers were going to have to fight to come out on top.

Following their weekend at the State Tournament, the Encampment Tigers ended their season as the No. 3 team in the 1A Conference. For the past four years, seniors Dayne Anderson and Reid Schroeder have taken some pride in taking the TIgers to state three times.

"To be able to say that my team and I went to state three out of four years is pretty awesome," said Anderson.