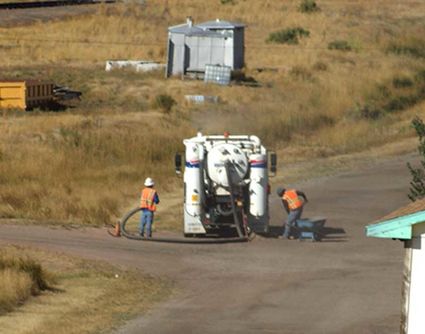 Photo by Mike Armstrong North Fork Engineering goes potholing using a hydro-excavation truck on Front stree in Hanna in late Saptember to find where the water pipes are located.

The Hanna Town Council met at 6 p.m. on Oct. 8 at the Hanna Town Hall. All council members and mayor were in attendance.

The agenda and regular meeting minutes for Sept. 10 were approved.

Council member Bob Patton reported that Carbon County Council of Governments met in Hanna and had an update on the 6th Penny tax and a speaker on the number 211 (see CCCOG calls 211 on page 5 of the September 25 Saratoga Sun).

Public works reported that they were gearing up for winter.

David Sutter, director of the water treatment plant, said water consumption was going down. He said it was due to resident...