Despite score, Panthers push against Rattlers 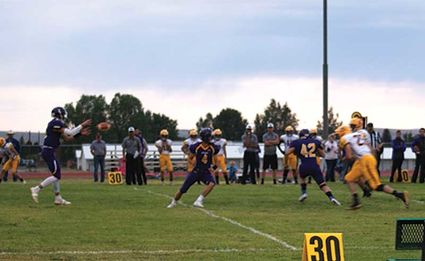 Saratoga Panthers get off a play in the game against Little Snake River on Friday at Saratoga.

"Our team is more talented than the score showed," Saratoga High School head football coach Logan Wright said after Little Snake River handed the Panthers a loss at 0-71 on Thursday evening at Saratoga.

Wright makes no excuses, but acknowledged the birth of a new little Wright on Monday had him miss practices with the team.

"We were not as prepared as we could have been," Wright said. "Saying that, it was our first game and it was against a strong Baggs team. We just were not ready to face the pressure this team gave us."

The first quarter had the Rattlers shoot ahead with 21 points as the...