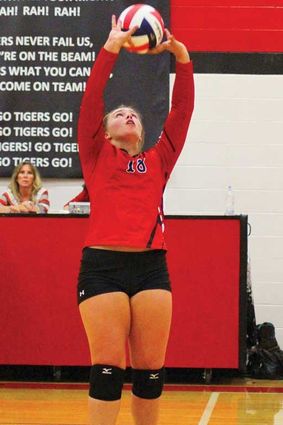 Lizzi James sets the ball for a return on Wednesday.

The Encampment Lady Tigers hosted their first match of the season as they welcomed the Hanna, Elk Mountain and Medicine Bow (HEM) Lady Miners into Tiger Nation. Encampment would ultimately fall to the state runner-ups (20-25, 19-25, 18-25), but not without a fight as they worked to keep the scores close. At the end of the day, however, the Lady Tigers would not be able to take a set from HEM as they ended the game 0-3.

"The girls did work really hard and played well as a team," said Robin Brown, head coach for the Encampment Lady Tigers. "Passing and defense were strengths for us in this game. We were able to pass with accuracy and found that we were leaning on some of the younger players to deliver accurate passes on serve receive." 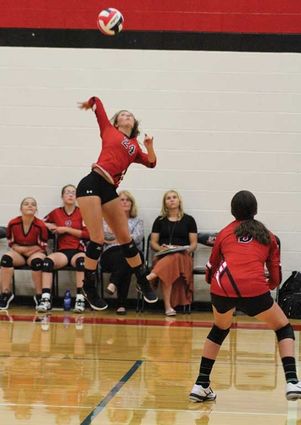 Shiann Finney jumps for the ball during the game against HEM.

Schroeder, along with her double-digit kills, served 4 aces against the Lady Miners across 9 serves and maintained a serve success rate of 88.9 percent. James served 10 times and was able to keep her success rate at 100 percent. Sophomore Katie Dugger also kept a 100 percent serve rate as she served a total of seven times.

Tieszen led the digging for the Lady Tigers with a total of 17 digs and Finney followed with 16 digs.

"We found that many of our errors were a result of our mental game and communication," said Brown. "The girls have been working on strengthening this part, so we hope to bring a stronger game into conference play."