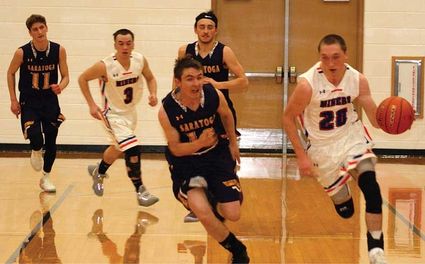 Panther Justin Jeffs runs even with Miner Conor McGraw as he heads down the court in the game on Jan. 29.

The Hanna, Elk Mountain, Medicine Bow (HEM) boys basketball team had very similar experiences with three teams they have met before. They lost to the two Valley teams and resoundingly beat Dubois this past week.

Head basketball coach Cliff Jones would like to have won, but was not unhappy with...