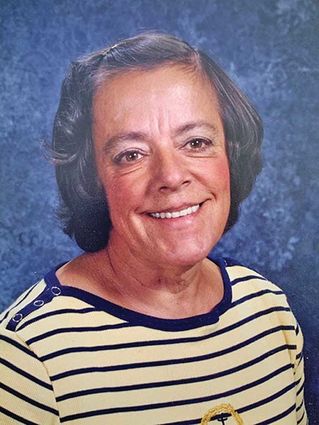 A native of Greece but daughter of Wyoming, Elizabeth Ann "Betsy" Peck Christensen of Encampment died early Christmas morning, Dec. 25, 2018, at the Davis Hospice Center in Cheyenne of complications resulting from a three-year battle with cancer.

Betsy was born Feb. 27, 1953, in Volos, Greece. At the age of 3 in 1956, she was welcomed into the loving arms of her new parents, Roy and Margaret Peck, in Riverton, Wyo., becoming the little sister to one-year-older John Christopher – "Risty" – who had come to the family from Patras, Greece, a year earlier.

Betsy grew up on the old Peck dairy farm on West Park in Riverton, relishing the opportunity and freedom to ride her horse, Sorry, master the Hula-hoop and learn to ride the unicycle. After attending grade school in Riverton and McCormick Junior High in Cheyenne, she attended Riverton High School when the family returned, graduating in 1972.

While attending Casper College to study nursing in early 1973, she visited Encampment with a friend and met Danny Doyle Christensen. Fittingly, their first date was an Encampment Tigers basketball game. The two immediately hit it off, became engaged a few months later and married Sept. 22, 1973.

The young couple lived on the Silver Spur Ranch near Encampment at first, then moved to town and soon built the house on Freeman Avenue that was to become their home for the next 41 years. Son Terry was born in 1976, daughter Jenny in 1977.

Betsy and Dan ran Christensen Trucking together, and over the last 22 years Betsy supported Dan's career with Sinclair Oil. She held a number of jobs over the years but settled in eventually with Second Impressions in Saratoga, where she worked for more than eight years.

Betsy led an active life. She loved Encampment athletics, for many years traveling to the regional and state basketball tournaments even after Terry and Jenny were out of school. She was active in the community, especially on the Beef Committee, helping to raise funds to support Encampment students at the county fair and to offer scholarships.

The family loved camping at Hog Park, French Creek and later Vedauwoo, and Dan and Betsy loved the Wyoming Cowboys, attending hundreds of football and basketball games over the years.

Betsy was extremely loyal to her family and would drive hours to catch a play, dance performance, athletic contest or academic program. She was always there. She bowled faithfully in Walden for many years.

Betsy will be forever remembered for her indomitable spirit, her huge and loving heart, her generous nature, her loyalty to family and her many friends, her love of animals, especially her dogs and hummingbirds, her wicked sense of humor, her welcoming home, her toughness and courage in the face of physical challenges and her boundless love.

She was preceded in death by her parents, Roy and Margaret Peck; mother- and father-in-law Orsen and Belle Christensen; and brother-in-law Dave Christensen.

Cremation has taken place, and a memorial service was held Sunday, Dec. 30, at the Encampment School.

The family would welcome a memorial contribution in Betsy's name to the Ribbons of Hope family cancer support organization for Carbon County at www.ribbonsofhope.org or to an organization of your choice.