Lady Miners surprise everyone but themselves 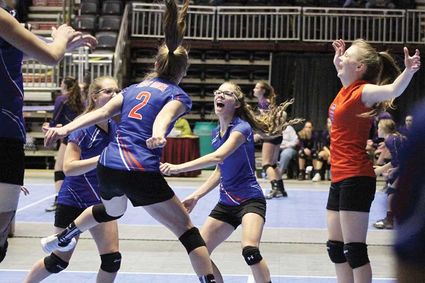 Lady Miners celebrate a win at the State Tournament Saturday.

In the beginning of the season, Hanna, Elk Mountain, Medicine Bow (HEM) High School volleyball team set a goal they ended up achieving and going beyond.

The beyond was going to the State finals.

HEM head volleyball coach Jackie Jones said she had an inkling early that the Lady Miners were going to be a contender this year.

"After State last year, I could tell the girls were not just satisfied with making it to just State," Jones said. "In knowing that, I knew the schedule was going to be fairly rigorous, but we had teams on our schedule we knew we could have confidence going into them."