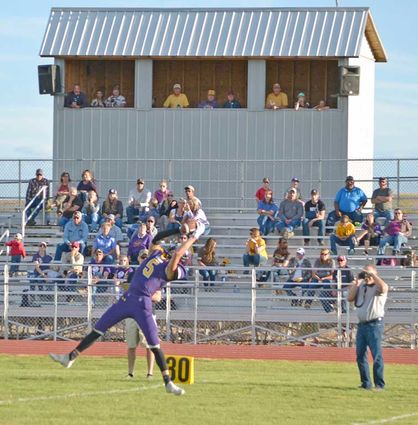 Teegan Love makes an acrobatic catch in front of the home crowd against the Natrona JV Sept. 11.

When asked how he felt when the score was tied at 52 to 52 with 57 seconds left, Logan Wright, Saratoga head football coach, said he was not worried.

"I was confident we would get the ball down the field and win," Wright said with a smile.

He was justified because in 27 seconds the Panthers got down the field and scored against the Riverside Rebels who were visiting. The Rebels made a gallant attempt to come back one more time, but time ran out and the Panthers won their homecoming game. It is also the last time the seniors on the team will play at home.

The game started out going the Pant...