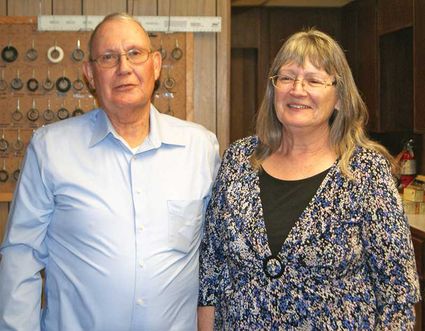 Kenneth (Ken) Gunter is the new pastor at First Baptist Church in Saratoga. He has been pastoring at the church for about a month, but he didn't come to the town without knowing something about Saratoga.

"I have been pastoring for over 31 years," Gunter said.

Gunter was born in 1949 in West Plains, Missouri. He said the town is near the Arkansas border. He lived there until he was 13 and then his family moved to Ault, Colo.

When he graduated high school, he served in the army for four years and is a Viet Nam vet.

When Ken finished his service with the military, he attended Oklahoma Baptist University.

Once he graduated, his first church he ministered was Calvary Baptist Church, in Holdenville, Okla.

"It was just when I was getting out of college that they offered me the position." Gunter said.

"It has been a day or two since that time," Jayne Gunter, his wife, said.

"We have known each other since she was in junior high and I was in high school," Ken said. "I used to run around with her brother all the time, then she grew up and I got interested."

"Actually it was his sister that got us together with our first date," Jayne pointed out.

"We have been together for 45 years," Ken added.

They got married two days after Jayne turned 18 and he was 22, in the army.

"I robbed the cradle," Ken laughed.

Ken likes to wood carve in his spare time.

First Baptist is his sixth church Ken has pastored at and he heard about the opening at the Wyoming Baptist State convention.

"I was going to retire from the pastorhood, but I was miserable not preaching so I sent my resume and started looking," Ken Gunter said.

The Gunters have lived in Wyoming on three occasions. The first time was in 1973 he had come to work for Dr. Lewis Stednick in Cheyenne. He said after Cheyenne, he bounced around between Colorado and Wyoming.

He and his wife discovered Saratoga when they came here on their 40th anniversary and stayed at the Hotel Wolf.

"We just loved it," Ken said. "So when I heard that there was an open church here, I said, "I would love to pastor there-and now here I am."

He said the Baptist church is a warm and welcoming church and looks forward to all that would like to come and worship with them.

Ken Gunter said Sunday school starts at 9:45 a.m., then service starts at 11 a.m. and another service is at 6 p.m. There is also a Wednesday service at 7 p.m. He said it is a traditional Baptist Church service.

Jayne Gunter spurs on the youth to attend the church's services.

"The young people are going to be the leaders someday, so we encourage them to take part," Jayne Gunter said.

"Members are expected and visitors are welcome," Ken said with a little laugh.