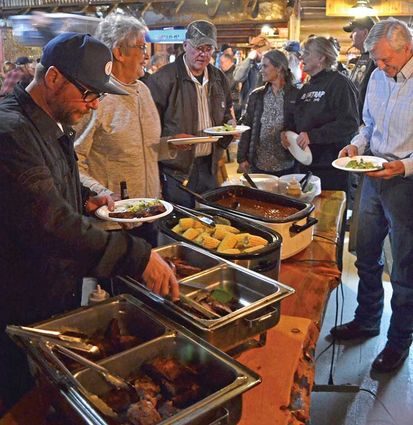 The crowd at Friday's reopening of the Bear Trap seemed pleased to get barbecue and fixings.

"So, this is legit. I found out today that Margaret was issued a temporary liquor license, and upon placing her liquor order for this weekend, was denied her order. There is a lot to this story, but to sum it up ... the previous owner never paid taxes to the state of Wyoming. The State has decided to put a lien on the Bear Trap which in turn, means no liquor license, until the taxes ($9,221) are paid IN FULL. There is still a temporary license issued for this weekend, so don't fret, the show will go on."

When Krissy McIrvin typed those words as she set up the "Save The Bear Trap" GoFundMe campaign for Margaret Weber in the early hours of March 8, she had no idea the response she would receive nor that she would exceed the campaign goal within only 15 hours.

Krissy McIrvin and her wife, Abby, have been among the several people who have been devoting their available time to helping Weber get the Bear Trap ready for the re-opening on March 9. Krissy McIrvin had been doing just that when she watched as Weber attempted to place a liquor order for the upcoming event.

While a liquor license is being transferred with the Wyoming Liquor Commission, a person is supposed to be able place liquor orders on the previous license. Weber was given the license number and, when she went to place an order, was informed it was placed on a tax hold due to sales tax that had gone unpaid by Jolene Pavelka.

Weber was informed by the Wyoming Liquor Commission to talk with the Excise Tax Division.

Weber, having already been dealt a number of blows in the process of re-opening, broke down.

"I went from 'Okay, let's get ready to do this' to absolutely defeated," said Weber.

McIrvin talked with Weber about using GoFundMe to try and raise the money needed to pay the taxes and remove the lien, but Weber was hesitant.

"I know her so well," said McIrvin, "She'd never ask anyone for help-and she needs help. It was really that simple. I'm going to help her if she's not going to ask."

Due to the funds raised, Weber was able to make a wire transfer and settle the unpaid taxes allowing her to continue with the re-opening.

"There were people I worked with 20 years ago at A-Bar-A that donated hundreds of dollars," Weber said.

The donations continued despite the goal having been reached and they did stop at the GoFundMe campaign.

All throughout the day on Thursday, Weber had people coming into the Bear Trap to donate cash or checks as well as merchandise to sell at the re-opening.

The help provided by the Valley didn't stop at monetary donations as several people came to Weber's aid to get the Bear Trap ready for the re-opening.

Jason and D'Ron Campbell entered the bar at 11:30 a.m. on Friday and began the process of helping clean.

"They (Jason and D'Ron Campbell) cleaned up the front porch and Jason was in the dish pit and they scrubbed and did everything," Weber said, "Kristie Anderson came in and did the same thing. Lindsey Noreen and her two or three interns were here the previous night (Thursday night) cleaning everything and putting stuff on walls."

As the reopening began at 6 p.m. on Friday, the GoFundMe campaign saw a spike in donations as word once again spread. According to Weber, several people donated cash in person apologizing for having missed the online campaign.

By all measures, the reopening was a success. Not including tax and gratuity, the Bear Trap made $3,600 in sales Friday night.

"We almost had 100 people here to eat, plus everybody else that was here to drink and party and enjoy the reopening," said Tyler Clason, "It was a pretty exciting and a very, very, very good turnout. If that's any indication of what we are going to be expecting as far as clientele, I absolutely 100 percent believe we are going to be very successful." 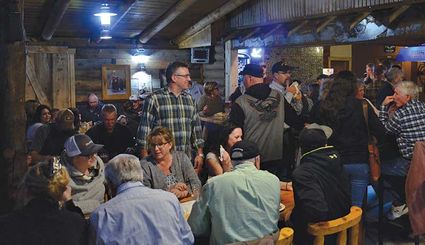 Eating and socializing were the focus of the early parts of the evening.

Weber and McIrvin have both expressed their gratitude to people inside and outside the Valley for the donations and support that was shown.

"You can't find a community like this anywhere else. This is special. There's nothing like this, said McIrvin, "I really appreciate what I've seen from this Valley and just reconfirms why I live here and want to start a family here."

"I wouldn't have been able to do this without everyone's help. The text messages I got, the Facebook messages I got, from people I haven't seen or spoken to in years, of support. I seriously have been a puddle of tears the last three or four days. It's angry tears and defeated tears-and then just being in awe and thankful for the love," said Weber.