Miners take 2 of 3 in Regionals, take second seed to Casper 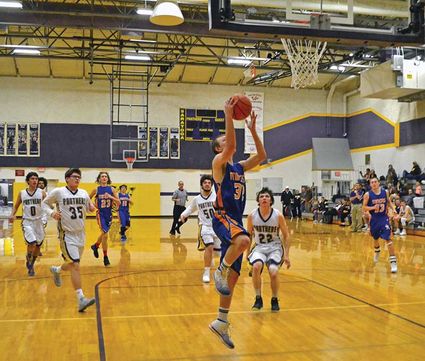 Brendon Reeves goes up for a layup against Saratoga in a game before Regionals.

"We had a very good weekend of basketball," Cliff Jones, Hanna, Elk Mountain, Medicine Bow (HEM) head coach for the boys basketball said. "The team competed well in all three games and earned an entry into the state tournament by placing second."

On Friday, the Miners beat Normative Services Wolves from Sheridan 68-43.

The Miners continued their winning streak by beating the Hulett Devils by double digits 74-62.

The winning streak came to an end against the Kaycee Buckaroos.

"We lost to Kaycee in the championship game, but played pretty well as we were down by single digits with four minute...