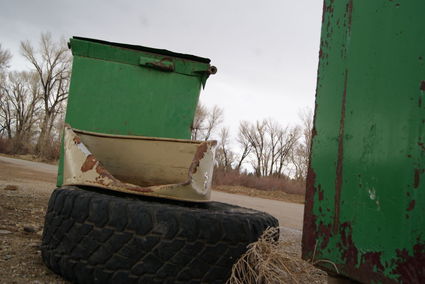 Town-leased dumpsters may be off limits for residential use, according to conversations in the Nov. 5 Saratoga Town Council meeting.

According to Carbon County Commissioner Sue Jones, who also serves on the landfill board and is co-owner of Sunrise Sanitation Services, others depositing garbage in town-or-business dumpsters in Saratoga is a "real problem".

Mayor John Zeiger said he had heard concerns about the Saratoga Municipal Pool dumpsters specifically, and how that area looked with so much incoming trash.

Public Works Director Chuck Bartlett said the problem has affected his department, specifically when residents use the dumpster to dispose of construction and demolition items like tires.

"This has been a continual problem," Bartlett said. "People dropping their trash off I guess doesn't always bother me, but when they start throwing tires and construction debris, like TVs and sofas in there, that's when we start having a problem, and that is what we are seeing at the hot pools."

Bartlett said the dumping is also a problem at the Saratoga Lake dumpsters.

Jones said, any kind of residential use of those dumpsters is against the law.

"It is against the law," Jones said. "It is theft of services."

Jones said the town of Saratoga may also be losing money on their dumpster service when residents use it excessively.

Jones said those dumpsters are for tourists, but not for everyday use from residents.

"They shouldn't be for town residence to take their trash there," Jones said.

However, Jones said part of the problem may be residents don't know the law.

"Some don't even know that they are breaking the law," she said. "They are just cruising town and they don't want to bother going to the landfill, so they just stop by and put their trash into somebody's dumpster."

Saratoga residents can either dispose of their trash by taking it directly to the landfill, or pay for disposal services.

Saratoga resident Richard Hodges asked the council if removing all the town-owned dumpsters was a viable option. Zeiger said removing the dumpsters would not solve the problem, but only lead violators to other dumpsters in Saratoga.

Councilman Steve Wilcoxson said removing the dumpsters could potentially cause a littering problem.

"I would rather see it in the dumpster rather than on the side of the road," Wilcoxson said.

Council members talked about ways to educate the public and possibly putting signage near the dumpsters.

Saratoga Police Chief Tom Knickerbocker said at least one camera of the camera system to be installed at the hot pool will be in view of the Saratoga Municipal Swimming Pool parking lot, where the dumpsters are located.