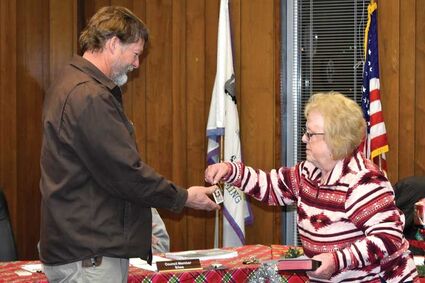 The mayor for the past four years of Hanna, Lois Buchanan, stepped down on January 3, at a special town council meeting at 6:30 p.m. at the Hanna Town Hall. Council members Sammy Sikes, Jayson Nordquist and Bill Dys were in attendance while council member Tracy Fowler was absent. Buchanan, running a little late by her own admission and got to the meeting just as it was 6:30 p.m.

"What a day to be late," Buchanan joked as she sat down. "Especially since we have only one thing on the agenda." She was referring to the swearing in of Jon Ostling as the new mayor of Hanna.