Accident on Interstate 80 injures on EMT, claims life of another 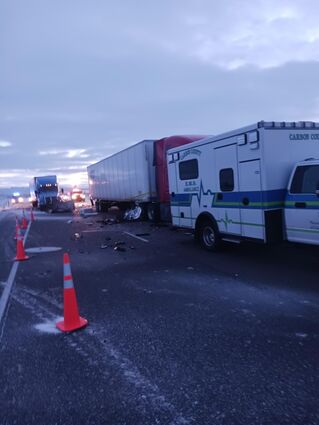 The accident involving Memorial Hospital of Carbon County EMTs has shut down Interstate 80 between Rawlins and Creston Junction as well as other routes.

A collision on Interstate 80 has injured one Memorial Hospital of Carbon County EMT and claimed the life of another.

According to a press release from Memorial Hospital of Carbon County, EMTs from the hospital were responding to a request for assistance in Sweetwater County in the early morning hours of December 21. The incident occurred on Interstate 80 between mile marker 195 and 197 in the westbound lane. During the call, the MHCC ambulance was truck by another vehicle causing injury to one EMT and the death of another.

"With respect for the families involved, additional details are not being divulged at this time," read the press release. "We would like to ask that same respect be reciprocated by the community."

MHCC is working closely with law enforcement regarding the details of the accident according to the press release. First responders from the Rawlins Fire Department will be assisting MHCC emergency personnel to provide additional resources as needed.

According to the Wyoming Department of Transportation, the crash has closed the Interstate 80 westbound and other routes. The estimated opening time as of 9 a.m. was 4 to 6 hours.

In a press release from the Wyoming Highway Patrol at approximately 1:15 p.m., the first responder who sustained fatal injuries has been identified as 29-year-old Tyeler Harris of Saratoga, Wyoming. The driver of the semitruck has been identified as Saviol Saint Gean of Brooklyn, New York. Driver inattention is being investigated as a possible contributing factor of the crash.

The Saratoga Sun will continue to update this article as information becomes available.