Miners get a lesson

HEM started the season starting with one of the best teams 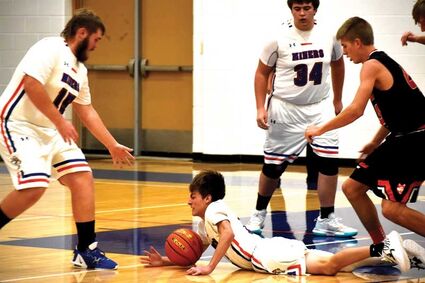 Miner Hayden Atencio goes after the loose ball as Cody Priest offers a hand and Rayce Ward is ready to move in the game against Burlington on Friday.

The Burlington Huskies went to Hanna, Elk Mountain, Medicine Bow (HEM) High School to prove they are a team to watch this year.

The younger, smaller Miner team played hard, but it did not take Burlington long before they had control of the game.

The HEM team did manage to get into double digits, but the Huskies were also able to score another 36 points. The final outcome was 72 to 20.

"Burlington was a tough way to start off the season, but it also showed the boys this is one of the teams you a...