Local Church makes items easily available to those in need 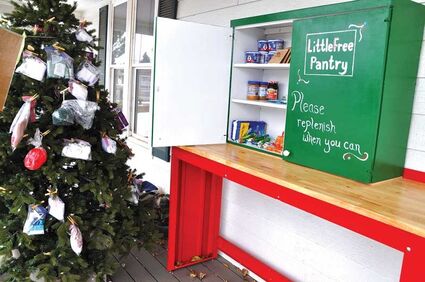 The giving tree and Clare's cupboard at St. Barnabas Episcopal Church in Saratoga.

Saint Barnabas Episcopal Church, initially called the Church of the Heavenly Rest, sits at 106 West Main Street in Saratoga. It has been there since January 10, 1889. It was the first completed church building in the Saratoga/Encampment Valley and cost Thomas H. Hood approximately $1,000 to build.

Saint Barnabas Episcopal Church has been a haven for travelers and those in need of rest and sustenance since the day the doors opened.

The Rectory, currently called the the Agape House, is on the corner of Main and First Street. The east porch of the AgapeHouse is where the Giving Tree and Clare's Cupboard are situated.

Sponsored by the Saint Clare of Assisi Chapter of the Daughters of the King, the tree stays in place year around. It is replenished regularly by volunteers with socks, knit hats, personal hygiene items and even dog treats. This tree is a welcome sight to someone in need.

This summer, the Daughters of the King added bicycles to the porch. Food items including cookies are hung on the tree as well but recently it was discovered that the squirrels are stealing the little packages. The Reverend Susan Dyer explained that The Daughters of the King have added a new feature to the porch to elude the kleptomaniac squirrels. Clare's Cupboard is a new ministry for folks who need food when the community food pantry isn't open and for travelers. The cupboard will be stocked with prepared food and snack food items. The cupboard sits on a beautiful workbench that was made possible with a grant from the Wyoming Hunger initiative.

The Daughters of the King chapter are soliciting donations for Clare's Cupboard via a Reverse Advent Calendar–instead of receiving a gift, those taking part in a reverse calendar donate an item each day. The reverse advent calendar began November 27, the first Sunday in Advent.

December 2: Microwave meals (such as Hormel)

December 17: Chicken in a pouch

December 18: Baby food in a pouch

Donation bins are located in the rear of the church, 24 hours a day, 7 days a week.

The ribbons for the Prayer Fence are also part of the ministries of the St. Clare of Assisi Chapter of the Daughters of the King. Located in front of the House of Hope, just west of the church. People are invited to say a prayer and tie a ribbon onto one of the lattices in front of the building.

In addition to all of the above, a new blessing will be added to the trees in the yard of the Agape House. Coats for men, women and children will be hung from the branches as they become available. All those in need are encouraged to come and find a coat that will work for you. If you would like to donate a coat, please contact Virginia at 307-321-3933.