A fun first for the Saratoga Museum 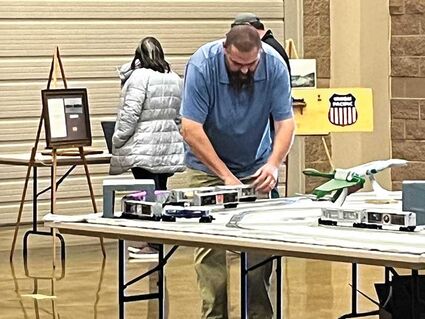 The Saratoga Museum held an event that has not been seen here, in Saratoga, in the past. The first Model Train Show was held November 19, 2022 and it was a hit with more that 140 attending the event.

Museum Director, Dana Davis, wanted to create an event that would be family friendly as well as get kids and adults interested in trains and museums. Since, most of the museums in the area have train related displays and the Saratoga Museum building is an old Union Pacific train depot, a model train show seemed to be the perfect type of event.

The Grand Encampment Museum and Hanna Basin Museum in addition to the Saratoga Museum had displays depicting model trains or the history of trains in Carbon County.

There were some very interesting and widely varying types of trains entered into the show.

Aaron Durst owner of Geek-ish Things in Rawlins brought an enormous Star Trek themed model train. Adults loved it and so did the children who tried to race the train around the track.

Herb Porter brought a vintage Union Pacific model train along with pamphlets which gave great information about the railroad and gold spike day.

One thing most people learned at this year's show–there are different track and train sizes that are denoted by a letter; H, HO, G, N and Z. The train enthusiasts were all happy to share their knowledge. 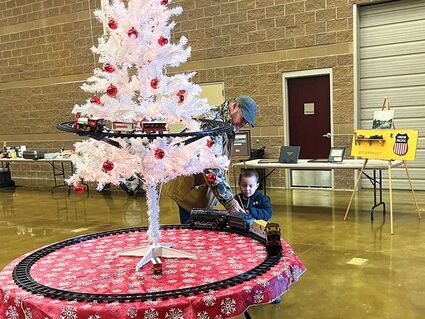 Jimmy Campbell and grandson have fun playing with one of the trains set up at the Model Train Show.

Jeff Frederick from Treasure Island Homestead, displayed a train he had found, circa 1914, that had a wind up key on the side. It was one of the hits of the train show. He let people try it as long as it was not wound too tightly. The antique train was so fast, the tracks were banked to keep from flying off the tracks.

Volunteers at the Saratoga Museum also created diorama train models such as Halloween town, a fairy garden and Christmas tree with trains that kids could play with.

Several people approached Davis inquiring about starting a model train club at the model train show. Keep an eye on the Saratoga Museum's website saratogamuseumwy.com for an announcement.

This year's model train show was such a success and so much interest was expressed in having a show again next year, Davis said that it will likely become an annual event.

The Saratoga Museum tries to create a variety of events and fundraisers through out the year. The next fundraiser will be 'A Toast to History' December 3 at the Platte Valley Community Center.