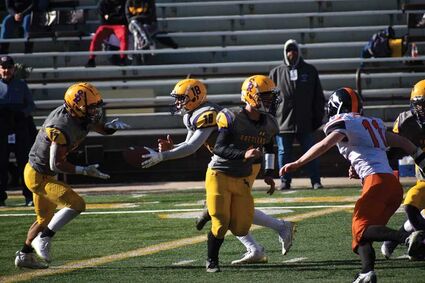 Bridger Cozzens blocks as Zane Matheson hands off the ball to Hadley Myers who scored the most points for the Rattlers in their 55 to 8 state championship.

"I feel so much satisfaction right now," said Jack Cobb, head coach of the Little Snake River Valley (LSRV) high school football team, immediately after the last seconds of the game ticked away making the Rattlers the state champion again. Cobb said, "I am so proud of these boys, these seniors who have won three state championships in the past four years. It is such a tight team and this is what football is all about."

As Cobb finished speaking LSRV fans and players mobbed the popular coach with praise and wishes of congratulations.

The LSRV Rattlers beat the Burlington Huskies 55 to 8 to c...