Getting ready to give 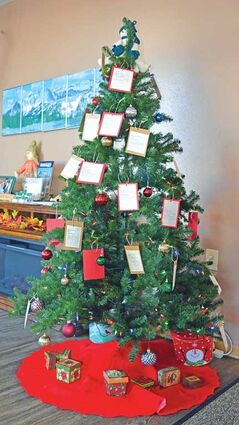 The giving tree will be located at Town & Country Realty, forms are available if you wish to participate.

Families wishing to have their children represented on the 2022 Christmas Giving Tree are urged to return information forms by Thursday, November 17.

Kassey Westring, organizer of the Giving Tree project for the sponsoring Valley Service Organization (VSO), said the forms are to be sent to the address on the form. They may also be given to the children's school secretaries. Forms were distributed earlier this month to valley schools, pre-schools and Head Start, and ask for information on each child's age, sizes, preferences, interests, needs and gift wishes.

As in the past, the Giving Tree will be located at Town & Country Realty in Saratoga. Informational tags will be available after Monday, November 21. The tags contain information about each individual child but there is nothing to indicate who the child is.

"All information received identifying the children involved and/or their families is kept in strictest confidence" Westring said.

The deadline for returning unwrapped gifts to Town & Country along with the original tag is December 14.

VSO has organized this project for several years to provide Christmas gifts for children in Saratoga and Encampment who otherwise might not have much of a holiday. Last year's donations allowed 65 children from 27 families in the valley to have a wonderful holiday.

In recent years VSO expanded the project to include residents at Valley Care Center.

Westring noted that some groups donate cash rather than shop for gifts. Last year's cash donations were extremely generous, according to Westring, and allowed VSO to also purchase gift cards for food for the families