Rattlers are going to state championship

Encampment is taken out of playoffs by LSRV 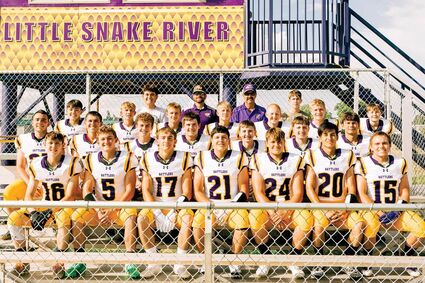 "We had a really rough start to this game where we made a lot of mistakes early and things continued to snowball after that,"  Head coach Kegan Willford of Encampment High School football said.Willford is talking about the game on Saturday in which the Tigers faced the undefeated Little Snake River Valley (LSRV) Rattler High School football team in Baggs.The game started very quickly to go in the Rattlers' favor in the 1st quarter.The Rattler head coach Jack Cobb decided to keep his leading rusher for the team, Kannadis Peroulis, out of the game to be 100 percent healthy for the championship, so he had Hadley Myers carry the ball 24 times. Myers gained 334 yards against the Tiger defense. Myers not only rushed well, but caught two passes for touchdowns. Myers scored five touchdowns for the Rattlers and five PATs (point after touchdown). This player had a very good game against Encampment and his coach was proud of him."I told Hadley at the beginning of the game he was going to be given more touches of the football, and he didn't disappoint," Cobb said. "I also put out a challenge to senior Wade Corson to play center, which he has never done and he did a great job. Jaden Thomas was another player who was tremendous."The Rattlers scored 30 points by the time the 1st quarter was over.Encampment did not lay down and die and did their best to keep the LSRV machine from scoring in the next quarter keeping the Rattlers to two touchdowns before halftime. Unfortunately for the Tigers they could not get any points on the board even though they marched down the field several times.Cobb said feeling the game was in hand wanted to score quickly in the second half to get the running clock going."It would never be to embarrass a team, but I wanted the clock to start moving so we could have less time for injuries," Cobb said. "Encampment is a big physical team and no matter the score, you can count on them to play their hardest.."In the 3rd quarter, the Rattlers scored first and got the running clock as the score went to 50 to 0. Encampment got a score from Quade Jordan who went in from a pass he received from Kaban Pickett. Arthur Elhern got the PAT and the Tigers were on the board 8 to 50.Cobb gives credit to Encampment for continuing to try and mixing it up."Honestly, Encampment changed things up and they might not have scored, but they had some some seriously good attempts that fortunately for us did not end with any points," Cobb said. "They have to feel good about next year knowing they are a tough team."Cobb said Seth Maxson who scored a touchdown was another player which made the coach happy with his performance."Overall we had just a great game on both defense and offense," Cobb said. "I am happy the boys were up to the challenge of taking on a good team like Encampment."Willford walked away from the game with some optimism about next year."It's tough to end the season in this way, but hopefully it will motivate our returning players for next year," Willford said.Now LSRV must face the Burlington Huskies who defeated Dubois 77-28.Cobb had said three weeks ago to the Sun, the Huskies were a team that could not be discounted to reach the finals."I watched the game and Burlington seemed to take the wind out of Dubois' sails," Cobb said. "Burlington took charge early and took care of business. They are going to be a different opponent than we have played this season."Cobb knows Burlington has major motivation for wanting to win."They have six seniors and they have played together a long time and know each other well," Cobb said. "It is going to be a challenge and a good game."Cobb has four seniors and hopes that will help offset Burlington's seniors."My boys have been with me for four years and it would be great for them to win their last game," Cobb said. "It would be an excellent achievement for them to walk away with three championships in four of their years playing. This bunch has worked so hard over the years and I want them to walk away on top if possible."Cobb said he knows Burlington is a strong team that can stay with LSRV."They can score in a lot of different ways which always makes me nervous," Cobb said. "I have to say I am excited about playing next Saturday and look forward to it, but I am sad too, because once the game is over so is the season and I will miss coaching this team tremendously."