Panthers pounce back on Vikings

Saratoga comes back from last week's loss in a big way 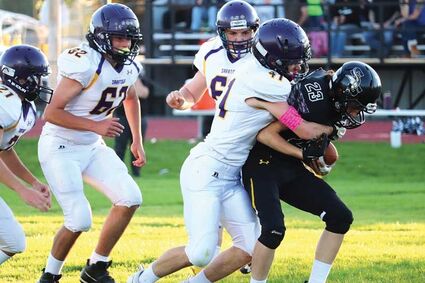 Saratoga Panthers swarm a Guernsey-Sunrise Viking as the Panthers scratch up a 76-0 win.

Head coach for the Saratoga Panther football has said all season long his team this year was one of the best teams he has coached.

The first team they faced in Wind River is one of best teams having gone 4-0 thus far. Wright knew his team did well but in the end, the Panthers lost. Moorcroft the Panthers beat handily. The last game against Niobrara County was a bit of a disappointment to Wright, because he thought the Panthers were capable of beating the Tigers, but the game didn't turn out that way.

This week the Panthers devoured the Guernsey-Sunrise Viking football team.