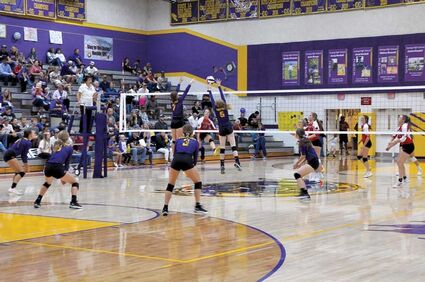 Whitney Bennett and Shelby Knotwell reach for the sky to block the ball.

The Lady Panthers had a tough time with the Encampment Lady Tigers in the first set of Thursday night's game but they came out fighting with the next three sets. "We put together a solid match against Encampment. I felt we did a better job on defense and found a good flow as a team. I was really proud of the girls and how hard they played" said Coach Love.

Whitney Bennett cleared the net with 13 kills followed closely by Makenna King with nine. Their teammates never let them down either, bringing the crowd to a roar and to their feet.