Saratoga stayed within six points for most of the game 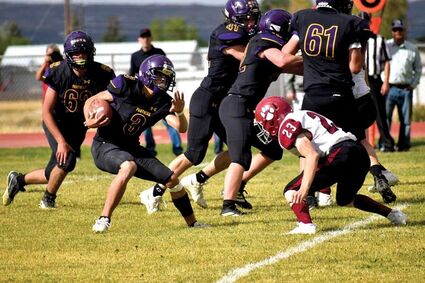 Panther Seth Stephens carries the ball and makes a great move in the game on Saturday.

The Saratoga Panther High School football team faced the Niobrara Tigers and played extremely tough throughout the game until the 4th quarter where some tough breaks had the Tigers jump ahead 14 more points to be at 20 with eight minutes left in the game.

Saratoga still did not give up.

The Panthers could not pull off a rally, but one player was heard shouting to his teammates, "Come on, there is still eight minutes left; the game is not over."

But try as they did, the score would end up 20-0 in favor of the Tigers.