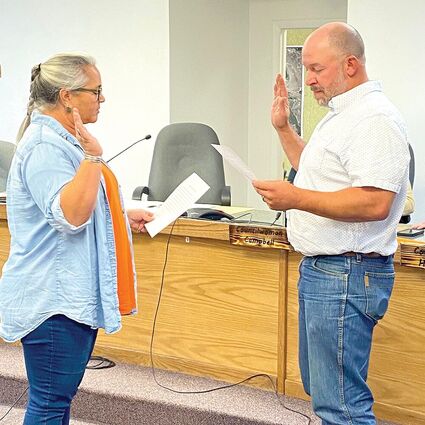 Kathy Beck being sworn in by Mayor Creed James.

Renee Snyder the Carbon County Assessor came to speak before the council Tuesday, September 6. She wanted the council's advise on how to get information to the residents of Saratoga, explaining the process involved in accessing the value of their property. Snyder explained the entire complicated process that is involved in assessing property and buildings. Mayor James suggested a pamphlet sent along with the assessment.

A letter was received from Bridge Street Bargains concerned about the condition of the Odd Fellows Park. The letter stated that when BSB gave the grant to develop the park,...