Smoke billows and belts slap at the Tractor Pull 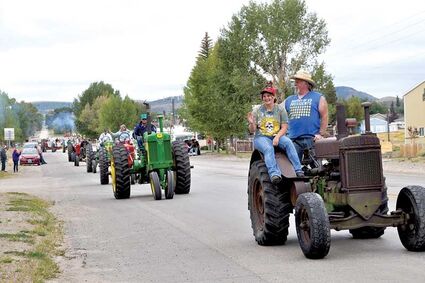 The tractor parade on Saturday was a lot of fun for participants and on lookers.

The 26th Annual Chug and Tug Tractor pull started off with a parade tractors. They huffed and puffed up McCaffrey Avenue to the post office, turned around and came back down. Many tractor fans lined the highway to take pictures and kiddos clambered for candy being tossed to them.

The oldest tractors were owned by a couple out of Craig. Richard Oberwitte drives a 1937 John Deere AR. the first rubber tired tractor in Moffat County. Oberwitte has owned the tractor he drives for five years. He found it in a corral of goats, took it home, and cleaned it up. He said it didn't need restoration, just a good cleaning and some maintenance.

Angela Oberwitte also has an antique tractor, it's a 1937 Minnesota Twin City Tractor that she bought from Fred Lorenz's collection.

• RaeLynn Dirks of Riverside with her JD H.

• John Smith of Riverside with her JD M. 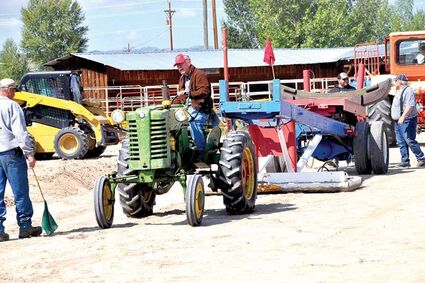 Heavy tractor pull of nearly 3,000 pounds at the Chug and Tug Tractor Pull.

• Richard Oberwitte of Craig with his 1937 JD AR

• Angela Oberwitte of Craig with her 1937 Minnesota Twin City

• Jim Madsen of Craig with his 1953 Farmall Super M

• Dian Bauer of Encampment with her 1953 Farmall Super M

Bill Spicer of Craig with his JD 730

• Dough Schneider of Craig with his 1959 Cockshut