Saratoga comes up short against Wind River at home 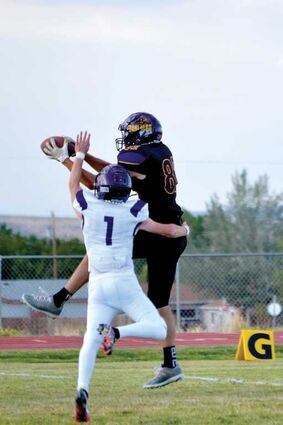 Heston Fisher goes up for the ball in the Wind River game.

"In my opinion, there were two different games played," Saratoga Head Football Coach Logan Wright said. "Until the middle of the 3rd quarter, we were playing competitively and then the wheels sort of came off."

Wright said, until that time, the score was 14-20 in favor of Wind River.

The first half of the game was going fine for the Panthers. Both teams were playing even.

In the beginning of the 2nd half, the Cougars got more points on the board but the Panthers were not worried.

"We played well before the middle of the 3rd quarter and then it was like we couldn't play the game we had, up...