60 years between the lines 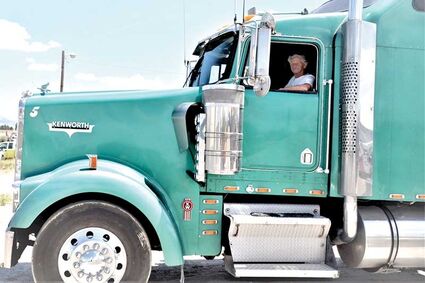 Safety pays off for Donnie Peters, pictured above in his Kenworth.

Donnie Peters, of Saratoga, has been recognized by the Owner-Operator Independent Drivers Association (OOIDA) for 60 years of safe, accident-free driving of a commercial tractor-trailer. Don currently works for Danny McGuire of Saratoga.

The OOIDA Safe Driving Award Program is designed to recognize and reward OOIDA members for their safe, accident-free years while operating a commercial vehicle. Safe driving awards are available to all eligible OOIDA members who qualify based upon the number of years for which the member has operated a commercial vehicle without being involved in a preventable accident.

When asked, how long he has actually been driving truck, Peters said "sixty two years. I drove a ten-wheel dump truck my junior year in high school during the summer in 1960, didn't need a CDL then. It was mostly farm work. Then I went to hauling freight from Long Beach to San Francisco Bay area."

Peters also said that he really likes driving but is ready to slow down.

What attributes to the fact that Peters hasn't had any accidents?

"There was a period of time in my 30's when I wasn't one of the more conscientious drivers. About 30 years ago I decided that I could be a better driver, so I do it consciously. I go out there, don't speed, don't run stop signs, don't tailgate, follow the rules and stay professional. There's a lot of guys out there that are the same as I am. They're really good drivers. Training has a lot to do with it," he said.

Peters was asked about the types of freight he has hauled over the years.

The Kenworth W900 is Peters favorite make of truck. "They seem to fit me, they feel good. They're tough. That's why they make such good logging trucks. Don't like Volvo's. They're fine on the highway, but off the pavement, not a good thing."

He was also asked, what is the easiest thing to haul?

Peters response, "what I'm doing now is easy. The guys I haul for are easy to deal with. My boss is easy to work for."

He has a few words of wisdom for new drivers. "My folks taught me to work hard, show up on time, do your job to the best of your ability." Peters went on to say, "don't damage anything, stay clean and go home! "