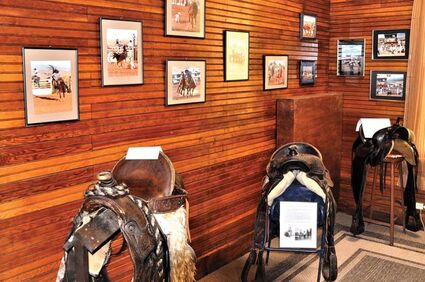 The Saratoga Museum is featuring an exhibit of rodeo pictures and a few local cowboys' saddles, including Charles A Kennaday and Ken Olsen.

From the 1800's to present day, raw country was developed and managed by ranchers and farmers.

The word rodeo owes its roots to a Spanish word, rodear, meaning "to surround". Although ranching has been around since the Middle Ages, it was in Spain and Portugal that raising and tending to cattle in masses appears to have originated. Herding, roundups, cattle drives and breeding all came from this area.

For approximately 100 years throughout the 18th century, Spain was sending missionaries to the Americas. Out of necessity, the missionaries needed cows and ranching skills. The ranching culture we find in America stems from the vaquero culture, specifically Northern Mexico. This is where horsemanship comes into play.

After the civil war, the cowboy era began. Land was being converted into ranches, cowboys found work by running cattle and managing ranches.

Being a rancher is no easy task, even these days with more modern equipment, the work to be done and the skill to do it is timeless and, at times, primitive.

After a long day on the ranch there is a group of highly talented, skilled horsemen with time on their hands. Small town competitions came from events such as stock shows, thereby sparking the Wild West before the modern day take on the rodeo impromptu competitions.

Cowboys competed for their share of the prize pot or "just for the hell and glory of it".

Rodeo is simply built by hard working people with a passion for ranching and history. Teaching skills, techniques and common sense to the next generation.