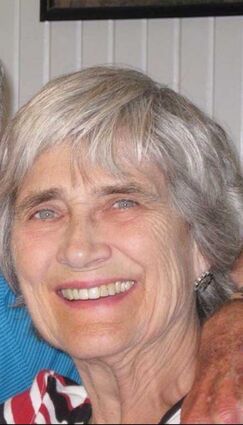 Mary Louise (Peryam) Noton passed away peacefully on February 5, 2022 in Billings, Montana at the age of 80 with her husband of 58 years and daughters by her side.

Mary Louise was born May 26, 1941 in Louisville, Kentucky to David and Gail Peryam. In her early years, the family moved frequently due to her father's career and military service. While he was away at WWII, Mary Louise spent her early years in Encampment, Wyoming where her great grandfather homesteaded in 1879. Eventually the family settled in Park Forest, Illinois where she graduated in 1958 as valedictorian of a class of 300. Mary Louise attended Oberlin College in Ohio following the footsteps of her grandmother, Marguerite Peryam. She graduated in 1962 with a Bachelor of Science in Math.

While at Oberlin, Mary Louise worked as a babysitter in her spare time. On Ground Hog Day 1961, a knock on the door changed her life forever. Ron Noton was in town from Illinois to visit his sister and nephews. He was greeted by their babysitter and that's the beginning of their great love story. From that day on, the two were inseparable. They married two years later on June 22, 1963. Ground Hog Day, 61 years later, in 2022 was Mary Louise's last lucid day on earth.

In the late 1960's, while living in Western Springs, Illinois, they had three daughters, Linda, Diane, and Gail. While initially a stay-at-home mom, Mary Louise spent her days driving to the University of Illinois-Chicago Circle earning a Master's degree in Math Education in 1978. Soon, Ron's career with IBM took them to Billings, Montana where Mary Louise taught Math Anxiety at Eastern Montana College (now MSU-B). Over the years, many people wished they could have attended her class.

After a brief stint in Plano, Texas, they landed in Littleton, Colorado. With her family raised, she became a volunteer at the Littleton Hospital and spent considerable time giving them her service. She developed a love for swimming at the YMCA where she eventually "swam the English Channel".

In 1996, Mary Louise inherited the stone house in Encampment, Wyoming. In 1998, she fulfilled her lifelong dream to live there full time. For seven years, she and Ron were snowbirds to Tucson, Arizona. They gave that up in 2006 to spend time with their grandchildren in nearby Saratoga. She was on the Board of the Grand Encampment Museum for about 8 years in charge of acquisitions and on the Library Board in charge of the annual Book Sale for two years.

Not only was Mary Louise an intelligent, accomplished person, but she was also very creative. She loved crafts and working with her hands. Her main passion was quilting. She earned awards for her quilts at the Carbon County Fair and in Tucson, Arizona. If she wasn't quilting, she could be found playing bridge at the Senior Center. Mary Louise also collected dolls from an early age. Her collection of 400 includes rare dolls, homemade dolls, Hummels, and a variety of dolls from all over the world.

Mary Louise was generally a quiet person but had some serious wit. In her later years, she said the funniest quips that came out of the blue. She loved her family and was a devoted wife, mother, and grandmother. She was a kind, classy lady. Frontotemporal dementia (FTD) robbed the world of her wonderful personality. In the end, a short- term abdominal infection took her life. Mary Louise was a beautiful person inside and out. She had a gentle heart and strong determination. Her body may have been frail, but her spirit was not.

She was preceded in death by her parents and brothers, Bruce and Ken. She is survived by her husband of nearly 59 years; daughters Linda (Jon) Swanson, Diane (Scott) Coale, and Gail Ford; grandchildren (Rowan, Larissa & Ashton Ford; Julia & Megan Swanson; William & Scott Coale), sister Laura, and many other relatives.

Cremation has taken place. A memorial service will be held Saturday, July 30th at the Encampment Presbyterian Church at 10:30 am followed by a luncheon. Immediate family will have a private graveside service at the Mountain View Cemetery. In lieu of flowers, please consider a gift to the Grand Encampment Museum, P.O. Box 43, Encampment, WY 82325 or to a charity of your choice.