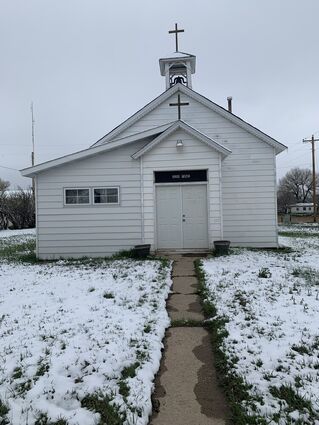 More than two years since it held what was thought to be its final sermon, St. Luke's Episcopal Church in Medicine Bow will be reopening its doors as Chapel on the Plains.

On September 22, 2019, Reverend Arlen Rounds conducted his final sermon in the historic church. Joined by fellow clergy and two close friends-Bonnie Culver and Jeanette Fisher­-Rounds recounted both the history of the church and his own history within the building through both tears and smiles. After years of driving from Laramie to Medicine Bow, Rounds had chosen to retire and move to Cheyenne.

By the time he left, the Epsicopal church had only two parishioners-Culver and Fisher-who were both Methodists. With Rounds' retirement, the church was "mothballed '' until the Wyoming Episcopal Church could determine whether or not the church could be reopened. Since that time, residents of Medicine Bow took care of the church in the hopes it would one day swing open its doors.

On May 20, nearly 20 current and former residents of Medicine Bow gathered in the Medicine Bow Community Hall to discuss the future of the church with Fitzhugh.

Fitzhugh's role in the Wyoming Episcopal Church is an interesting one. Under Bishop John Smiley, she served as the Missioner of Fresh Expressions of Faith, wherein she was tasked with taking the church outside its walls and to the people who needed it. When Smiley retired, Bishop Paul-Gordon Chandler led the Wyoming Episcopal Church. Fitzhugh described the new bishop as a force of nature with his mission to "grow the breadth and depth of the church" in Wyoming.

So, Fitzhugh went from being the Missioner of Fresh Expressions of Faith to Canon for Mission Outreach and Advancement. This meant that Fitzhugh not only worked within the churches, but had to find ways to get outside the church, too. Citing the parable of the wineskins-which directs one to put new wine in new wineskins rather than old wineskins which may burst-she said old wineskins still need to be preserved.

With Chandler's mission to renew the presence of the Episcopal Church, his sights were set on Carbon County. St. Thomas in Rawlins and St. James in Encampment were both without a priest. The candidate to lead both those churches was Fitzhugh herself, who left her ranch and husband in Douglas to move to Rawlins.

When a contractor appeared in Medicine Bow to take measurements of St. Luke's, word spread quickly that a part of the town's history could be removed.

"There was a possibility-and I'll tell you right now it is not going to happen-that we were contemplating if it could be financially feasible and logistically feasible we were going to move it to our retreat center in Cody," said Fitzhugh. "I will tell you that after I was here two days later, we have put that idea to rest. It physically cannot be moved anywhere north of Casper. There's no other plan at this point to move it anywhere."

St. Luke's, like many old buildings, is showing its age. According to Fitzhugh, the walls are beginning to settle, one the windows is beginning to buckle and a portion of the floor is sagging and in need of reinforcement. While the church can't be moved, the Wyoming Episcopal Church, according to Fitzhugh, wants it to be a part of the community rather than let it remain mothballed.

This led to a flurry of suggestions from those in attendance, ranging from opening the church for weddings and funerals, holding monthly prayer groups and even listing it as a trucker chapel for those truck drivers who come through Medicine Bow.

Robert Heward, president of the Friends of the Medicine Bow Museum, said the museum would be willing to help maintain the property and even hold tours of the church. He added the museum was not interested in purchasing the property. Additionally, members of the Medicine Bow Town Council said the municipality would be willing to pay for the repairs needed to the building. The buckling window was of great concern as one of the stained glass windows holds the history of Medicine Bow and all of them were painted by Dorothy Minter, a former resident of the town.

By the time the nearly two hour community meeting had concluded, it was decided St. Luke's would reopen as Chapel on the Plains and would be a non-denominational church, though the Episcopal Church would still oversee it. An "official opening" of the Chapel on the Plains is tentatively planned with a barbecue and pot luck beginning at noon on June 25.