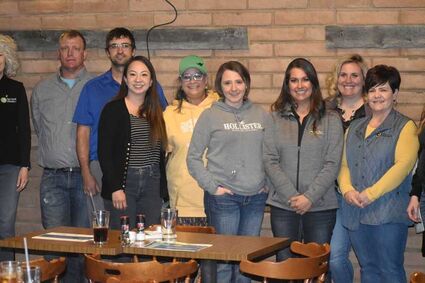 The current class of Leadership Carbon County pose for a photo following the lunch presentation from the CCEDC at the C-Spear Bar and Grill in Medicine Bow.

To celebrate Industry Day in Carbon County, Yvonne Johnson, Director of the Carbon County Economic Development Corporation (CCEDC) held a day of touring local energy companies operations and a lunch where guest speakers spoke to those enrolled in the current class of Leadership Carbon County..

The start of the celebration began with a tour and presentation at the Holly Frontier (HF) Sinclair Refining Company.

Once the tour of HF Sinclair Refinery was completed, the attendees headed to Medicine Bow to have lunch at the C-Spear Restaurant.

While enjoying their meal, the group of attendees first heard from Dan Bilka from All Aboard Northwest (AANW).

"AANW believes a comprehensive, long distance, passenger and freight rail network, with seamless connections to other modes of transportation throughout the greater Northwest, will create significant benefits to the region's economy, environment and equity."

He showed a map put out by Amtrak in the past year.

"If you look at this map, you might be surprised to realize that people live here," Bilka said pointing to the map onscreen which showed the mountain states and Pacific Northwest. "We can see a lot of potential for economics, equity for people being able to get around and using the railroad being good for the environment." Bilka said equity benefits to all, included low-income, tribal, disability and rural communities, locations where transportation alternatives are limited, and those people who cannot drive.

Bilka said he is looking for support from a regional level and has been pleased with Wyoming communities' support.

"All of our Western development is out of our Denver office and we have one major development project in Wyoming and hopefully in the future some more," Marston said. "We have been active in Carbon County when we worked on the early stages of TB Flats and Ekola Flats before it went over to Rocky Mountain Power."

Marston said Invernegy's projects Rock Creek 1 and Rock Creek 2 are based in both Carbon and Albany counties.

"It is where we left off with TB Flats and Ekola Flats," Marston said. "We split Rock Creek into two projects because we are connecting at two different substations so we are dividing the two projects down the middle."

He said Rock Creek 1 is mostly in Carbon County. He said ideally the construction will start in a year and be completed at the end of 2024.

CES is focused on acquisitions and investments in all clean energy categories.  The company works in partnership with investors to fund projects and acquisitions in the United States and select global markets at all phases of development.

CES and Bair Energies recently went before the Carbon County Commissioners on May 17 in Hanna to get permitted for a green hydrogen plant to be constructed in Elk Mountain. The commissioners voted 5-0 against permitting the project.

Bair told the group green hydrogen came from water. He said it can be created in liquid and gaseous form.

"We are really focused in getting it into a liquid, so we are doing liquifaction hubs across the United States and we have the largest green energy hydrogen project announced in the world today," Bair said. "Our partners ING Bank and we started a renewable energy and technology alliance platform, so we are not just a green hydrogen company. We own technologies in all types of different things. So we bring in all our technologies and evaluate what will work the best and fill the needs of projects as they come forward."

He thanked Johnson for all her help the past few months as CES got ready to before the Carbon County Commissioners.

Bair said he looked forward to working on projects in Wyoming as time went on.

"Carbon County is the leading energy county in Wyoming," Choquette said. "Although all wind projects look alike for the most part and make the same product, but they can serve different types of markets. Our wind project is really a wholesale power project that is designed to serve and deliver power to customers to the markets of California, Arizona and Nevada. Essentially places that have high demand for renewable energy."

She said the transmission route for the energy to go from southeast Wyoming to the western states has recently all been permitted.

"We are now done with that easement process and have all the land rights needed to build the Transwest Express Transmission project," Choquette said. "It is real exciting news for us, but we still have a lot of work to do to meet all the requirements from the BLM to get what is called the notice to proceed to construction. We are on track to get that in early 2023 and hope to get construction started in 2023."

Choquette said when they started the project in 2008, the company envisioned more wind turbines than they plan presently.

"The technology has changed and now we are looking at having few wind turbines but more powerful ones, so we will still produce over 3,000 megawatts of wind energy capacity," Choquette said. "It will mean less turbines on the landscape. Right now we are building the roads and turbine paths. We will look at putting the turbine foundations in 2024 and installing the turbines over the time period of 2025 to 2028. "

She concluded saying Carbon County is in the forefront of producing wind energy in Wyoming.

"As of 2020, two thirds of of all of Wyoming's installed and under construction wind power capacity was in Carbon County," Choquette said. "It gives you a sense of leadership that Carbon County has in this industry."

"Most of our renewable energy produced is sent out of the state," Siberal said. "Legislation in other states is changing. For instance in Utah, House Bill 411, past traditional sources of electricity such as coal can't be bought. Most of them go into 2030, so we are slowly phasing out our coal assets."

He said this means renewable energy investments are being increased in the State and a lot of it in Carbon County. Siberal said billions of dollars were being invested in the State for energy production by Rocky Mountain Power.

"We are going through immense changes," Siberal said. "It is an exciting time for us."

Once the presentations were finished, the attendees headed on a bus to tour the nearby wind farms to look at the turbines up close.

The group finished the day by listening to Carbon County planning and zoning presentation put forth by Sarah Burger and Kristy Rowan.

The attendees put in an eight day, but the consensus of the group once it was over, the time was well spent.