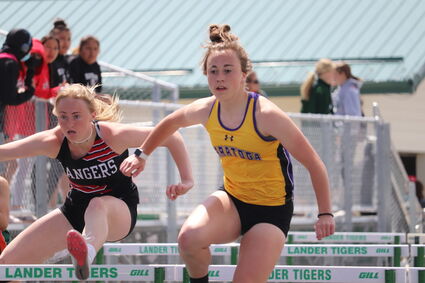 Whitney Bennett, right, clears the hurdles during the 300 Meter Hurdles in Lander on May 7.

The regular track and field regular season just finished this weekend for the Saratoga Panther High School track and field team after competing in meets in Lander and Thermopolis.

Head coach Rex Hohnholt has to make some hard decisions for what events his athletes have to compete in when he goes to regionals. Athletes can only compete in four events and some have pre-qualified for state in as many as seven.

"There are some decisions that have to be made, so I tried to put the kids in events I thought they would be successful at and take it from there," Hohnholt said. "It was important to t...