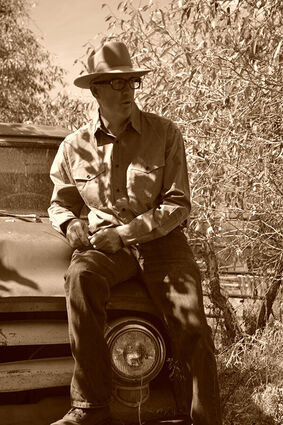 The task of capturing a summary of someone's life in a few paragraphs is an impossible one. Especially when that someone is as unique and extraordinary as Reggie was. One could write volumes. The following is merely a snapshot of a kind soul who meant so very much, to so many of us.

Reginald Jack Thornburg Jr. was born on December 5th 1962 in Fort Collins, Colorado. Most of us knew him as Reggie, or simply Reg. He is the son of Reginald J. Thornburg and Carolyn Werner. As a child he went on many camping, hunting and fishing trips with his parents and sister. On one occasion his father pulled him out of school to go to Canada to fish for paddlefish. He loved to explore everything and collected rocks. With a genuine love of animals, he helped his family raise German Shorthair Pointers, keep foxes and skunks as pets and even a Peregrine Falcon named Tiki.

He is a graduate of Fort Collins High School, Vo-Tech Agricultural School, School of Interior Design and Drafting. With hopes and dreams of becoming a skit writer for Saturday Night Live, he also attended the Barbizon Modeling and Acting School. This, however, was not to be his destiny. After a weekend visit to his Aunt and Uncle, Karen and Alden Condict on the Condict Ranch, he said "Forget about going to New York, Kare and Alden need help!!"

In the summer of 1980, Reggie came to work fulltime for Karen and Alden. In the years that followed, Reggie quickly became like a son to them, and like an older brother to their two sons, Alden Jr, and Michael. Reggie took to all aspects of the work on the Condict Ranch. Although he was never a "Cowboy", Reggie would be better described as a Cattleman. While he preferred working with the cattle on foot, he was nonetheless very capable on horseback when he needed to be. He enjoyed feeding, calving, branding and moving the cattle to their summer pastures.

Shortly after Reggie arrived at the Condict Ranch, His sister Charon and her husband Harvey Boxberger also decided to work for Karen and Alden. Charon and Harvey had two boys, Colton and Weston, who grew up on the ranch, under Reggie's influence.

The 1980s and 1990s were turbulent times for the Condict Ranch. In the midst of this, Reggie learned to Irrigate. He worked side by side with Alden learning the ditches and water rights of the Condict Ranch. He learned how to get the water to the fields and how to spread it once it got there.

Although Reggie had many interests and talents, his passion was understanding and operating the irrigation system of the Brush Creek and French Creek drainages. This area has been known as one of the most complicated and contentious systems in the state. Reggie often referred to himself as just "a worker bee" and preferred to spend his time on the land, at Ditch Camp and points in between delivering water to all of the many acres that it was permitted to. The late nights and early mornings, and the many hours that Reggie spent working within the system were not only for the Condict Ranch. Often times he was just as busy trying to help the other appropriators get the water that they were entitled to as well. He believed in the system as a system and was always working to get it back to the way it was originally intended to run.

Around 2012, drought years drove even more contention into the ranching community along Brush Creek, Cedar Creek and Elk Hollow Creek. The neighbors in these drainages, worn out from years of fighting, eventually decided to try a new approach. Many long meetings with the State Engineer's Office and Governor's Office ensued. Reggie's knowledge and participation in all of these meetings was crucial. Nearly a decade later, these ranchers have created an ongoing collaborative effort with the University of Wyoming to administer their water rights as close to Wyoming water law as possible. In addition to all the regular work on the Condict Ranch, Reggie also served as the Treasurer and Secretary for this ad hock group. He helped train and guide each new administrator and ditch rider.

Reggie was a builder, he made bridges, roads, headgates, diversion structures, siphons and drop pipes, and even elaborate chicken coops and bird houses. You could always tell Reggie's work. Not because he ever scrawled his name and date of construction on anything he did, instead because of his attention to detail and the quality of his workmanship, often times with an artistic flair. He had a unique ability to operate equipment, such as backhoes, dozers, excavators, road graders and, even the old American Haymaster. Not only did he build structures in the more than forty years of his life that Reggie spent working on the Condict Ranch, he also put the same dedication and care into building and rebuilding countless relationships with the people that he worked and interacted with over the years. Family, neighbors, contractors, employees and coworkers, just to name a few. As busy as he was, he was never too busy to lend a helping hand, offer advice, or just listen. His sister Charon said, "He was the glue."

The Condict Ranch was not the only place that he worked, being very close to his Grandmother Gertrude Collier, Reggie often traveled to Fort Collins to help out with another family business, Seder Plastics, an injection molding company. During the late 1990s, when Gertrude asked for some extra help, he made weekly trips to and from Fort Collins, working both at the plastics plant and at the ranch.

There was much more to Reggie than just as an irrigator, or a ranch hand, or a worker bee. His personality and devotion touched so many lives. He will always be remembered for his truly unique sense of humor. With his sly smile and unconventional wit, he had a knack for infusing humor into the most trying and tragic situations. Whether it was at a funeral or a contentious water meeting, he could always get a smile or a chuckle out of even the most stone faced person there. For those of us who knew Reggie well, it was his personality and perspective that primarily set him apart from most other people. He was kind, generous and a ferociously loyal defender of his loved ones and convictions. If you knew him, or even knew of him, it was apparent that he wasn't just one of the herd. A bit eccentric for a ranch hand, with his pompadour hairdo and gold sunglasses. If you didn't know better, he might have seemed a little out of place sorting cattle in the lane, or waist deep in the mud pulling a beaver dam out of a culvert. Though not a man of large stature, his tenacity in his endeavors couldn't be ignored. At the risk of his own peril, Reggie would not back down from a challenge or an argument. With an approach not unlike pouring gasoline on a fire, Reggie usually got his point across one way or another. Yet in the aftermath of even the bitterest of feuds, he was often the first to mend fences and let bygones be bygones.

Winston Churchill once said, "You have enemies? Good. That means you've stood up for something, sometime in your life."

You see, a person who seems to always get in the middle of everything and stand up for what he or she believes in, is often the subject of ridicule and rumor. These things never bothered Reggie, he focused and worked relentlessly towards what he felt was right.

Although it may sound like a cliché, he always took the high road and reminded us all to do the same. He didn't waste a moment of his time or an ounce of his energy on the words of his critics.

He once said, "I'd rather be the one being talked about, than the one doing the talking."

As if the above wasn't enough, in his spare time, Reggie drew, painted, and made elaborate wood carvings and structures. He published two novels and a children's book in his later years, and had rough drafts of several other books and short stories in the making. He liked tinkering with old vehicles and tractors and also traveled extensively with his Grandmother Gertrude to many places such as Egypt, Israel, Mexico, and the Caribbean, just to name a few. Whenever he got the chance, he loved to show visitors, and even the odd lost tourist, around the ranch and tell them all about the history of the area. On occasion, you might see him roll through the 4th of July parade in Saratoga in a Hudson or an old Cadillac.

On the morning of February 16, 2022, Reggie passed away suddenly as a result of an automobile accident. He is preceded in death by his father, Reginald Thornburg, his grandparents, Gertrude Collier (Ted), Edward Thornburg (Grace) John H. Werner, Kathryn Werner, and an Uncle, Keith Schafer.

A memorial gathering for Reggie will be held June 4th, 2022 at 1pm at Ditch Camp/10 Mile Wyoming. Lunch will be served. Please RSVP by May 21st. You can either call or text Weston at 307-710-6900, or Audrey at 307-710-5535 to RSVP or ask directions. Please bring your own chairs. In case of rain the event may be moved to the gazeebo at the Brush Creek Visitor Center.