The road not easy 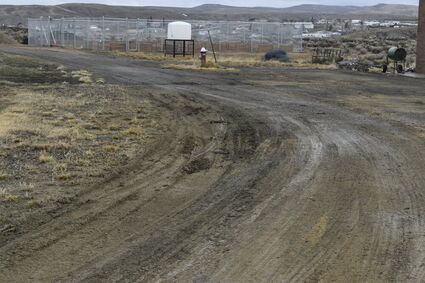 Wyoming offers challenges to residents during spring with weather often unpredictable. Gardeners have to judge when they should plant to get the most out of the season without being too early. It isn't easy.

Probably one of the hardest jobs is being the director of public works of a small town with a limited budget trying to keep up with what mother nature throws at them concerning the roads, especially in small towns with few paved roads.

Will Redmond who is the Elk Mountain public works director and only employee in the department said as the snow starts melting and there are days of freeze and thaw, there are some roads he knows that need some serious patching.

"I am trying to wait until it dries up some, because if you do it too soon, the ground can freeze, thaw and then have to do it again," Redmond said. "With it being only me, I don't want to repeat the work again because there is a lot of work to keep up with to begin with, but more importantly, small towns are not in the position to keep paying to fill up the same hole in the spring season."

Medicine Bow Public Works Director Hayden Bricker concurs with Redmond on how careful public works has to be when deciding to fix a hole coming into spring.

"Our roads have a mix of 50 percent gravel and 50 percent chip seal," Bricker said. "The chip seal is sometimes hard to tell around here with how dirt can pile up on it."

He said a problem faced with Medicine Bow is the town is flat and there are not a lot of options for water to drain off and it soaks in.

"The town is flat as a table and years ago when the town was first built, it was horse and buggy," Bricker said. "People did not give a lot of thought that they should get rid of the water and stayed on the street. Over the years, this has not been great for our roads."

Bricker said he knows some parts of the town gets bad but having to be careful with a budget, there has to be priority patchworks that can't wait, but ideally he thinks holding off until it is closer to May before trying to do serious patching.

"We always have to be aware of our budget especially since snow removal can be so expensive in winter and you only guess what a season is going to put forth," Bricker said. "We are putting in new streets and it is a challenge to update an old street to make sure it will drain properly."

Hanna Public Works Director Larry Korkow knows what Bricker is talking about as Hanna updates some of its streets. Some roads can turn into a muddy quagmire if drainage is not working well no matter what material and how much you put down.

"Crowning is a lot on how to prevent these muddy roads," Korkow said. "You can have a real mess if a street has no crowning working for it because drainage becomes a problem. There are flat streets that can be a real problem or a street that drains water onto a street that is flat, even if it is paved.

Korkow said that Hanna streets are 50 to 60 percent paved but being paved doesn't make a street get less holes in the freeze/thaw season.

"We do our best to keep roads in good shape but we have to be careful not to patch them up too early," Korkow said. "Otherwise you are throwing money away and I don't know any town which can afford to do that and if you are a small town, you really have to be careful. We understand residents' frustrations as roads get bad in this season, but our budgets are what they are and we have to try and stay within them the best we can."

Encampment Public Works Director Bill Accord agreed small towns have to be careful and be aware of water tables as the spring season sets in.

All four town public directors said mother nature can be a hard task master as snow storms come and go along with the freezes and thaws.

"We did get brand new pavement last year down our main street," Redmond said. "That helped us a lot this year but there is a lot of water in the soil and it can still do damage. Being the only public works person, I just ask people to be patient as I get to the job. For me, most potholes can be avoided if you are driving slowly. In my opinion a small town has a lot of kids running around and a driver should be driving slow to begin with.I don't mean to sound like a jerk saying that, but small towns are different from big cities in that you hope kids can run around without fear of them being run over."

Accord said Encampment has streets that are platted to 100 feet and it helps, but he tries to wait until snow is completely done before he grades.

"We might have to wait until June when we feel it is completely dry before we grade, because if the roads get wet, ruts can occur," Accord said."That is why you need crowning to be done on the roads.When blading there is a certain finesse needed to keep the crowns which are needed for drainage. This is the time of year we also get leaks we have to focus on and with only two of us, sometimes roads just have to wait."

"Our biggest problem is when we put in the new water line, we put in a new base, it is the fact we can't get the water away from the base. There is no place for the water to run to," Korkow said. "There is no drainage and it just sits on the road.no matter what sort of road base you have. If water is sitting on it, any of it is going to go bad on you. It is because the water can't get away from it. As the snow melts with no place to go, it mixes with the road base and it turns."

Korkow said this is why crowning is essential. He also said when he became public works director 13 years ago, there were 27 water leaks from pipes having water go into the streets. He said much progress has been made, but infrastructure projects take time.

Bricker understands sometimes there is frustration with the roads at this time of year, but patience is required.

"These roads have been here for 100 years and we are just now trying to catch up," Bricker said. "So I remind people, if you can bear with us, we are doing the best we can because springtime really is a challenging time of year."