New Hanna deputy leaves picks up in the town where he left off from when he was a boy. 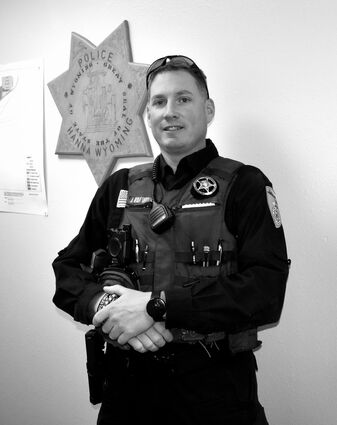 Hanna Deputy Marshall John Van Winkle is back in Hanna, his boyhood home and feels welcomed by the residents.

*Editor's Note: The print version of this article has the same headline as one on page 3 of this week's edition. We apologize for the error*

"I was only a couple months old when my family moved to Hanna," Van Winkle said. "My dad Ralph worked for the railroad and my mother, Linda worked at Wee Folks. People come up to me now and say they remember my folks and that feels good. It definitely makes Hanna feel very welcoming."

Van Winkle's family moved to Rock River when he was in 4th grade and he was in that community until his family went back to Hanna as he entered his 6th grade. He went to school at Hanna until his sophomore year and the family then moved to Cheyenne.

He admits occasionally he got called "Rip" in high school, but the name never followed once he graduated.

Following his father's footsteps when he graduated, Van Winkle worked for the railroad for two years.

Van Winkle likes to build things and decided construction might be a job to try out.

"I did it for a couple years, but I found myself working for the railroad again," Van Winkle said. "An opportunity for me to start my own construction firm occurred and I did that for some time, but I always had an urge to serve my community in a manner of law enforcement."

In 2016 Van Winkle decided to act on getting into the field he dreamed of doing.

"You can serve your community, state and country in this line of work and it felt right for me to pursue this type of work," Van Winkle said. "So I found a start in Rawlins in the Sherriff''s office."

Van Winkle was soon a corporal.

He enjoyed law enforcement but found himself wanting a change. He considered going back into construction because he did enjoy it and then he heard about the open position in the Hanna Marshal's office.

"Everybody had good things to say about him," Kranenberg said. "There were even some former inmates who said John was fair. He was a really good match for the town."

On March 15, Van Winkle was sworn in by pro-tem mayor Sam Sikes, who was filling in for mayor Lois Buchanan.

Sikes was a boyhood friend when he was growing up in Hanna and remembers going fishing with him.

"It was interesting having a person you know from your boyhood be the person to give you the oath of office," Van Winkle said. "It was welcoming and a proud moment. Who knew as boys one of us would serve the community by being on the council and the other would serve by going into law enforcement."

Welcoming is the word Van Winkle uses when talking about the past weeks as residents come up to talk to him as he goes around the town with Kranenberg.

"I have seen instances of people being very welcoming of John as we go around town on our patrols," Kranenberg said. "It is very heartwarming to see actually."

Van Winkle still has to finish up at the academy to get his certification and follows Kranenberg in FTO (field training operations).

Kranenberg said Van Winkle will come back from Academy and there will be a bit more FTO to merge operations and policy of the town and what Van Winkle gleaned from his certification.

Once this is accomplished, John will be on the beat alone meeting many residents he once knew when he was a boy.

"I know it is said all the time, that it feels good to be here when they get a new job," Van Winkle said. "But with my history with Hanna, I really mean it."