Pleasure doing business with you! 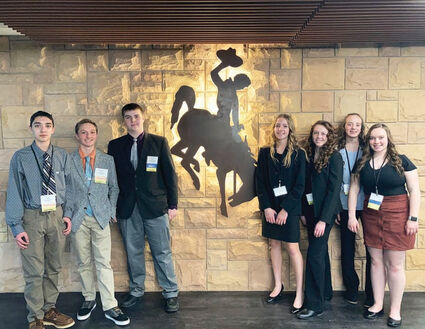 Members of the Saratoga High School FBLA Chapter pose for a photo following the State Conference March 16 through the 18 in Laramie.

Members from the Saratoga High School FBLA chapter had an amazing showing at their State Conference March 16 - 18 in Laramie. The event kicked off Wednesday evening with the Keynote Speaker, Brandon White who shared his personal story and passion for life while encouraging students to be risk takers and "own it". Milan Scott "owned it" as she volunteered to go on stage to learn how to dance the tango with Brandon White, who taught her the importance of quality leadership, in front of the nearly 500 people in attendance. It was an energetic and exciting start!

Thursday brought about workshops, competitive events, tours, networking opportunities, and more at the University Of Wyoming College Of Business. It was a long day that brought out the best from the seven Saratoga FBLA members in attendance. Several participated in speaking events and gave presentations to judges with many making finals for another chance to present and showcase their projects and talents. The day finished at the Albany County fairgrounds with dinner, a lip sync contest, and a dance where the students finally had a chance to really socialize and unwind from the competitive nature of the day.

Friday morning brought about a few final competitive event presentations, open testing opportunities, along with more workshops and tours around the University of Wyoming. In the afternoon, you could feel the excitement and anticipation at the awards ceremony as students waited to see if they'd be called on stage for a top four place. Competing against 32 other FBLA Chapters from around the state, with many being from larger schools, Saratoga students earned much recognition. The first to be called on stage were Aspen Sewell and Milan Scott for their Broadcast Journalism project. You could see a little shock on their faces as the awards were presented from fourth down to first, and they were the last ones standing on stage as champions! 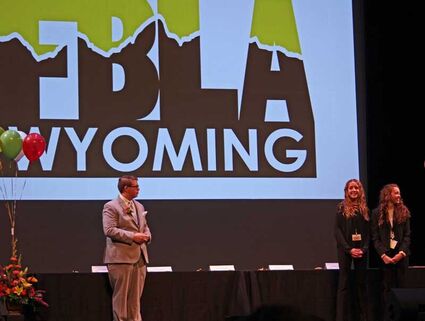 Aspen Milan, left, and Milan Scott wait to be presented their awards.

Computer Applications was the next event that had Saratoga students called up on stage, and amazingly enough they earned 1st, 3rd, and 4th place in the event! Rhiwan Williams received the 4th place medal, Allyster Ingraham placed 3rd and Aspen Sewell was announced as the winner for a second time! Continuing the recognition for the Panthers were Jaida Jennings and Rhiwan Williams who were called on stage for 3rd place medals in the Introduction to Business Presentations event.

A little snow at the beginning of the conference couldn't deter the Saratoga FBLA members as they had an amazing showing and qualified the six members mentioned above to compete at the National FBLA Conference and represent Wyoming this summer in Chicago! Congrats to all on such a fine performance, you made Saratoga proud!