Hoof it to the basket! 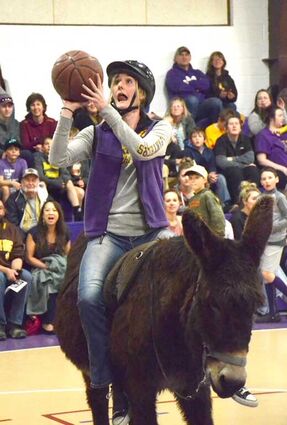 SES Teacher Heather Oxford gets her game face on as she goes in for a basket during Donkey Basketball on March 18.

Saratoga is no stranger to sports involving four-legged mammals, considering the popular rise of Skijoring over the past few years and the popularity of chariot racing the decades before. On March 18, another popular sport was held at the Saratoga Recreation Department.

Donkey Basketball-a sport invented in the 1930s as Depression-era entertainment-is still alive and well in the 21st century and drew quite a crowd on Friday evening. A total of four teams took to Kristen Campbell Court for a barn burner of a mini-tournament to raise funds for the Saratoga Aquatic Center.

Staff from the Sarat...