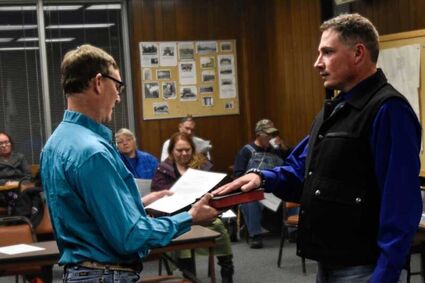 The Hanna Town Council met on March 8 for its regularly scheduled meeting.

Mayor Lois Buchanan was not present. Mayor Pro-Tem Sammy Sikes ran the meeting. All other council members were present.

After the approval of the agenda, John Van Winkle was sworn in as the new Hanna deputy marshal.

"Welcome aboard," Sikes said. "Good to have you."

Craig Kopasz, Engineering Associates, said he was working with Public Works Director Larry Korkow in anticipation of putting in the new water line. He said three contractors have called him about the job.

"We are still in the infancy of this project," Kop...