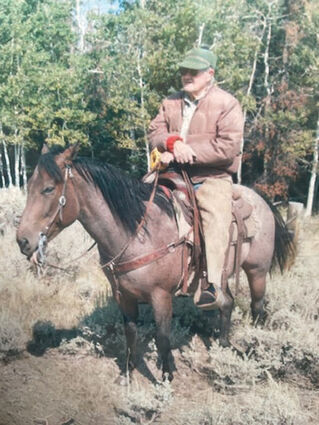 Gershom Richard "Dick" Barkhurst , 93, passed on to his heavenly home and to reunite with the love of his life, Marion, on the most appropriate day, February 14, 2022. Born September 8, 1928 to Gershom Jay and Vera Large Barkhurst in Rawlins, WY; he was raised an only child on the Barkhurst Ranch southeast of Saratoga, WY on Brush Creek which had been homesteaded by his grandparents G.H. (Gus) and Elizabeth Green Barkhurst in 1886.

When Dick became of school age he attended country school on Brush Creek for seven years with a few neighbor children. They went to school in the summer because it was too hard to get the kids to school in the winter. When it was time for high school Dick shared rides with Alden Condict to Saratoga or he would board in town. When in high school and through 4-H activities, Dick met lifelong friends and a special girl, Marion Huston. 4-H was a big part of his life growing up, showing cattle and sheep and judging livestock. He was on a 4-H livestock judging team that won a trip to Chicago to judge in the national contest. As a young boy, Dick delivered mail by horseback up to the Sanger Ranch on French Creek.

Dick and Marion Grace Huston were married on September 9, 1947 at her parents' ranch; this began a blessed and devoted union of 66 years. After the couple worked a short stint at the UW stock farm, Dick and Marion moved to Cow Creek on the Huston Ranch and helped Marion's parents for 20 years. Here they started their family and had four children; two daughters, Shirley Orlene and Elaine Marie and two sons, Leslie Leonard and Raymond Jay. In 1967, Dick moved his family back to the Barkhurst homestead on Brush Creek. They lived in the log house built by G.H. Barkhurst. They started with Shorthorn cattle and eventually went into crossbreeding using some of the best bulls in the A.I. program. For many years the whole family was involved in selecting, fitting, and showing feeder calves for sale to 4-H and FFA members all over the nation. Dick loved his registered Shorthorn cattle; striving for a superior herd was a goal. He had a genuine passion for ranching and fulfilled all of the ranch duties. One of his desires and accomplishments was putting up premiere hay. Dick also had good horses around that were used for ranching and hunting. He had some very special ones through the years. He was an avid horseman, could rope and earlier in life he enjoyed picking up broncs at the Saratoga arena.

Dick & Marion together began a big game outfitting business that produced many wonderful hunting experiences and stories. Twenty plus years of hunting camps and day hunts involved many family members as well as extended family. He enjoyed hunting and was very skilled at his guide service. This venture created many wonderful long term friendships all over the United States. In 1972 Dick took a memorable hunting trip to British Columbia with his cousin Tim Barkhurst to hunt caribou, stone sheep, and mountain goat. In his younger years Dick enjoyed fishing with his family and close friends taking trips to Lander to lake fish.

Dick and his family purchased the Vermeer Big Bale Company selling and servicing big round bale haying equipment. The company was a big part of their lives and was an opportunity for grandkids to learn the parts business as well. The company is still in full business with son Raymond and his family.

If you asked Dick if he had hobbies, he would shake his head and say "no, not really", but you could find him puttering in the shop in the evenings doing mechanic work on something that needed repair or designing a wood working project in the wood shed. He was known to be out there till way past dark.

Community involvement was also a part of Dick's nature. He served as a 4-H leader for 22 years and devoted a lot of time helping youngsters with their sheep or beef projects. Dick's devotion to 4-H and youth was very apparent and he once said, "We use our heads to stay in the ranching business and our hands to accomplish the ranch work, and since our hearts are in it, the life style brings satisfaction and pleasure."

So it goes to reason why all of the years of dedication and hard work have been put into 4-H and youth work. Dick was very instrumental in organizing the donor heifer program for Carbon County youth with good friend Dick Hiser. He donated several heifers over the years to 4-H & FFA project members to help start their own herds.

He served on the Carbon County School District Board for many years as well as the Upper North Platte Valley Water Users Association Board. Dick served on the Soil Conservation Service District Board for a term as well as three years on the Carbon County Farmer's Home Administration. The Wyoming Ranchers Family Camp was an organization that Dick put a lot of heart, time and energy into as he served on the committee and as treasure for many years. He was a member of the Encampment Presbyterian Church and served as an elder on the session. In 2005 Dick and Marion were honored to be Grand Marshals for the Carbon County Fair & Rodeo and led the parade. In 2011 Dick was awarded the Grand Encampment Cowboy Gathering Pioneer Award.

Dick was an extremely likeable man; he was soft spoken yet one listened when he spoke. He was the epitome of honesty, patience, hard work and integrity. He was a wise and stable rock for the family and the most unselfish person that would sacrifice greatly to make sure others were happy and thriving. Dick was a devoted husband, father and grandfather. Watching his kids, grandkids, and great grandkids grow up and participate in their activities brought him joy. Dick & Marion were always proud when a Barkhurst Ranch calf was being shown. They were great supporters of all of their kids and had many opportunities to watch them at fairs, jackpots, national shows and rodeos. Grandpa Dick had incredible patience with his grandchildren and was willing to take time to teach and show them his knowledge and skills.

Services will be held Saturday, March 12, 2022, at 11:00 a.m. at the Saratoga Cemetery Pavilion, Saratoga WY under the direction and care of Montgomery -Stryker Funeral Home. A casual gathering of family and friends will be held at St. Ann Parish Hall following interment. Pastor David P. Cole will be officiating.