Rattlers take two out of three 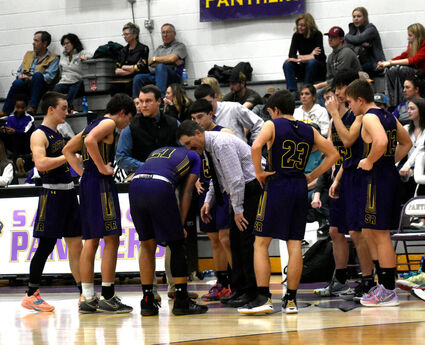 LSRV Head Coach Jack Cobbs talks with his players during a time-out at the February 18 matchup with the Saratoga Panthers.

The Little Snake River Valley (LSRV) Rattlers did exactly what head coach Jack Cobb wanted them to do. The Rattlers faced three conference teams that are all extremely tough and his team came away with two wins.

"Even my loss made me happy," Cobb said. "I think the boys overall did well against a team that is number one in the conference and arguably playing some of its best basketball right now."

Cobb is talking about the Saratoga Panthers.

Before the Rattlers faced Saratoga, LSRV faced another team with claws in the Encampment Tigers. The Rattlers played the Tigers on February 15 at home and won 42-29.

"We came out and hit shots early and built up our confidence," Cobb said. "The Tigers are a good team as everybody knows and they kept it close off and on until we were able to build up a lead that was good, but they forced us to make some mistakes that typically at this point in the season, I don't like. Saying that, a win against Encampment is always good to get."

The Rattlers then went to Saratoga on Friday to take on the Panthers on their home court.

The gym at the Saratoga High School was packed with supporters from both teams.

The first half had both teams playing hard trying to get their rhythm, but a high scoring game it was not. At half-time it was 14-11 in favor of the Panthers.

In the 3rd quarter, the Panthers pounced and ran up an 8 point lead and the game seemed to be getting away from the Rattlers.

"In the mid-to-late 3rd quarter, we kind of lost our heads a little bit," Cobb said. "We got it back to 5 points and then we had a tough foul that cost us a basket that could have cut it to 3 points and they hit a huge 3 point shot right at the buzzer and we were right back to being 8 points down."

Cobb said after the Encampment game, he had the boys focus on improving their play against the Panthers. He felt the team did what he asked.

"Even though we lost by 6 points, I really saw a lot of growth in my younger players," Cobb said. "That night I saw some of those kids really mature and take the shape of what we are capable of as a team."

Cobb said he is heartened by the support basketball is receiving this year. As the head football coach, he has seen tremendous support from the community for that game, but until this year, support for basketball was not strong.

"It is fun to watch the confidence grow in the team," Cobb said. "The boys are good athletes and they play with such heart."

Saratoga did a lot of things right, but their 3 point shooting was what Cobb believes made the difference.

"Those 3s can change the momentum so fast, and you see kids when they hit them, you can see they pick their heads up and if you miss a 3 on the other end, you can see heads drop," Cobb said. "Threes are a big part of the game and Saratoga hits those 3s at the right time. They are a really balanced team and all the pieces are there."

A highlight in the game for Cobb was the play of senior Landon Prestrud.

"Lance has been playing since 8th grade and faced injuries over the years that have kept him out of the game, but I challenged him to play defense in the 4th quarter and he got 12 rebounds," Cobb said. "As a coach, that is what excites you, when a kid steps up and is better that night in the 4th quarter exemplifies what can be gotten out of a game, even if it was a loss. I got so much positive out of the game at Saratoga and it carried over to the game against Cokeville the next night."

On Saturday the Cokeville Panthers came to the Rattlers home turf and although they played well, LSRV was up for the game.

"We played really well until the 3rd quarter," Cobb said. "We got into a little foul trouble then but we didn't collapse and I hope that means we are learning. That is what is important."

The Rattlers beat the Cokeville Panthers 47-35.

The LSRV Rattlers will face the Meeteetse Longhorns at the 1A West Regional Tournament in Lander.

“Even though we lost by 6 points, I really saw a lot of growth in my younger players. That night I saw some of those kids really mature and take the shape of what we are capable of as a team.”