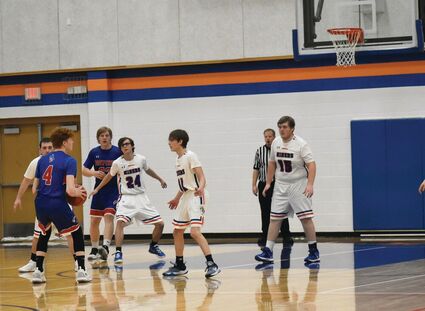 The HEM Miners defend against the Kaycee Buckaroos during their February 19 home game.

The Hanna, Elk Mountain, Medicine Bow (HEM) Miners faced two opponents who were not scared to run their press all game long against the team of five.

Head Coach Cliff Jones has no issue with a team who will run up scores. With five players he reiterates, the season is not based on win or losses but on how well the Miners improve week to week.

The first game of the week was on February 18 against the Guernsey-Sunrise Vikings.

"The game against Guernsey was not one of our best played games and Guernsey is a good team," Jones said. "But when the score is 50-15 and they were still fast breaki...