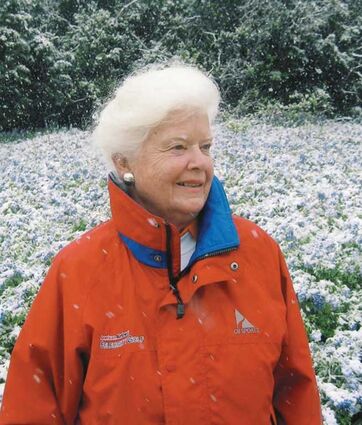 Bessie Liedtke, born June 20, 1925, left this world February 8, 2022, peacefully at home in Houston with family by her side, after a long and full life. When last seen, she was in her golf clothes, shoes and all, ready to play the next nine.

Known to all as BessieBessie, she was a gravitational force that kept three generations of family in swirling orbit, a point of reference and center to which all of us could turn. Passing her name on to grandchildren, great-grandchildren and any number of family bird-dogs, she also bequeathed to us all a joyous approach to full participation in life. Always her unmistakable self, she could transform from athletic to elegant without missing a step.

She had a wonderful circle of friends whom she loved to see, including her Houston Country Club and Old Baldy Club golfing groups, and the friends of her children, whom she adopted as her own friends. From Austin to Midland, Houston and Saratoga, BessieBessie was an active player in every decade she inhabited – a dancer and master of the "camel walk" (a loose jointed dance maneuver with which she left pro athletes and younger generations flailing behind her), a golfer who started with Harvey Penick and won tournaments up into her 90's, a crack quail shot, wearer of the Pi Phi arrow, a master of the unexpected joke at the least expected times, and above all, the star and centerpiece of her devoted family, who each cherished her love and affection.

We all wanted her to go on forever and none of us yet can quite yet grasp a future without BessieBessie in it, but we know that is not the pattern of life. We all find comfort and solace in knowing that hers was a life fully lived and gracefully departed.

Preceded in death by her parents Alfred and Laura Smith of Austin, Texas and her husband, Bill Liedtke, BessieBessie is survived by her four children, Billy Liedtke, Laura Bucholz, Cadell Liedtke and Claire Alexander, their spouses, 12 grandchildren and 18 great-grandchildren (with one more soon to make an appearance), her brother, Murray Smith, and a world of wonderful nieces, nephews and cousins. The family is deeply appreciative of the love and care given to BessieBessie by Jorge Surugi, Nena Guevara, Veronica Garcia Henson, Yani Silva, Virginia Acuna, Alva Navarette and Aida Rivas, and the years of deep friendship and patient financial guidance given Mom by John McCoy.

A memorial service will be held in the sanctuary of Memorial Drive Presbyterian Church, 11612 Memorial Dr., Houston, TX 77024, conducted at eleven o'clock in the morning on Wednesday, the 16th day of February. For those unable to attend in person, a livestream of the service may be accessed by visiting Mrs. Liedtke's online memorial tribute at GeoHLewis.com and selecting the "Join Livestream" icon on the Memorial Service section.

Donations in lieu of flowers can be sent to the Houston Arboretum and Nature Center, 4501 Woodway Drive, Houston, TX 77024 (https://houstonarboretum.org); the Corbett Medical Foundation, P O Box 343, Saratoga, WY 82331; First Tee – Greater Houston (https://firstteegreaterhouston.org), or the charity of your choice.