Saratoga boys still No. 1 in 1A Southwest following conference win 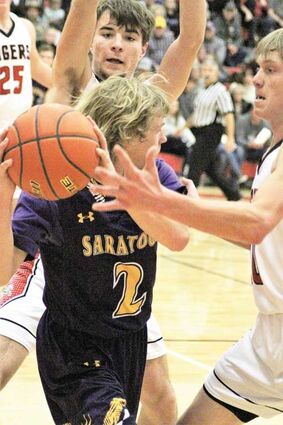 Grady Bartlett (2) defends against the Encampment Tigers during Saturday's game.

As the regional and state tournaments inch ever closer, the Saratoga Panthers are currently sitting at No. 1 in the tough 1A Southwest Conference as they narrowly lead the Cokeville Panthers for the top spot.

The Panthers were hosted by the Encampment Tigers on February 5 for a rematch between the two Valley and conference rivals. When Saratoga had hosted the Tigers a month prior, the Panthers had dealt a 21 point loss to Encampment. With home court advantage, the Tigers put up a fight for Saratoga the second time around.

"We knew our rematch with Encampment was going to be a hard fought ga...